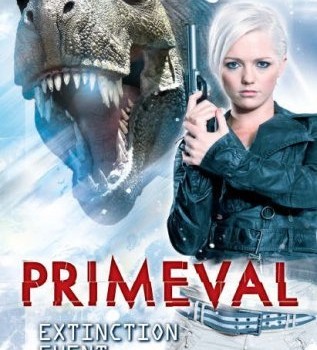 Primeval, the Saturday night sci-fi show genre fans love to hate. I’ve become a bit of the proponent of the show over the last few years; particularly the third season, in which Primeval’s ‘dinosaurs leap through rifts in time to terrorise England’ premise veered into more interesting territory, with all manner of fictional beasties and time travel clichés thrown in for good measure.

Sure, Primeval is derivative, but it was never conceived as anything other than solid family entertainment; a show, that, it should be noted, never insults its audience with the sort of cliffhanger resolving deus ex machina nonsense that a certain Russell T Davies became notorious for.

To tie in with Primeval’s fourth series – until recently the show’s future looked gloomy – Titan Books are releasing paperback editions of their four bestselling novels, Extinction Event, Fire and Water, The Lost Island and Shadow of the Jaguar. The question, I suppose, is whether or not this simplistic slice of pre-pub entertainment has enough hidden depth to warrant a move into prose. Probably. This volume is written by Dan Abnett, whose Warhammer novels practically shaped my teenaged years. The bastard. Abnett has always been one of the best franchise novelisation writers (arguably a better writer than a novel like this deserves) and he brings a sense of grave emergency to the story, which kicks off with an Entelodon attack on Oxford Street and hurtles by at such a pace that you barely have time to pick its well-trodden plot apart. It’s also far more violent than the show’s early evening slot allows.

Extinction Event introduces a decent antagonist in the form of Russian palaeontologist Nikolai Medyevin, who kidnaps Cutter, Connor and Abby and smuggles them to Siberia. The Russians are having the same dinosaur dilemma as us Brits, apparently, particularly from a formidable Tyrannosaurus Rex that they’ve named Baba Yaga.

Less successful, however, are Abnett’s attempts to capture the grand ineptitude of scruffy brainiac Connor, who is simultaneously the most likable and irritating personality on the show, and generally manages to save the crew only after endangering their lives in the first place. Connor always reminds me of Norman Price, the ginger kid in Fireman Sam, who implausibly managed to “accidentally” set fire to something on a weekly basis. Put Connor in a room with a large red button under a sign that reads ‘do not touch’ and he wouldn’t be able to restrain himself for five seconds…