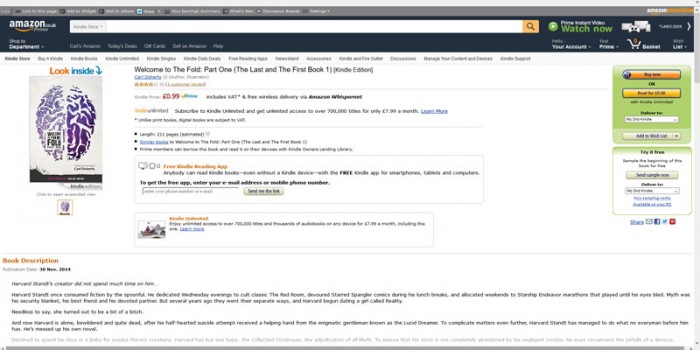 Wow, it’s been almost a year since I released the first part of Welcome to the Fold, and nothing much has changed. I was expecting fireworks for its debut, expecting the whole world to chant my name, declare me a literary visionary and hold a Star Wars-inspired parade for me, complete with at least one complimentary wookiee.

Of course that didn’t happen, and I wasn’t actually expecting anything of the sort. But reality definitely ruined 2015 in style. I was misguided enough to enter the self-publishing arena on the same month that my partner and I decided to buy our first home, and it’s only now, ten months later, that I once again find myself surrounded by brimming bookshelves, a neat little workspace and something resembling inspiration.

To my (admittedly vague) knowledge, Welcome to The Fold has been well-received by the few who’ve taken the time to read it. This year has been my least creatively productive for some time, due to months of renovation and financial misery, but I’m a glass half-full kind of guy (or at least trying to be one) and I’d like to think that 2015 has also been a year of discovery and learning. As someone who works in web marketing, I do know one thing: no matter how much you plan something, your hard work will inevitably present you with new challenges you could not have possibly anticipated.

Okay, then, a few things self-publishing has taught be this year:

Marketing a new book is tough

I was braced for the worst, but it is indeed an uphill struggle at every possible stage. There’s the timeless catch 22 when it comes to reviews; you need positive reviews to sell books, but first you need to shift books to get those positive reviews. First-time authors are entering a saturated market, with more people trying to sell you “eBook marketing solutions” than people willing to read your work.

My second novel, the surreal vegan thriller vegan(Vn), is on its way, and I’m hoping that each future publications will provide exposure for my back catalogue, but I’m becoming increasingly aware of the harsh slog I have ahead of me.

Or at least I’ve had no luck giving away my book for free. In fact, marketing it at a reasonable price has ultimately proved far more beneficial, especially in the case of Amazon. See, Amazon ranks free eBooks in an entirely separate haystack, one which your needle is even less visible. Conversely, I’ve found that pushing for a few sales has seen a considerable increase in sales rank and therefore visibility, subsequently leading to even more sales. Not so with the free promotions, there lies an even steeper and slippier slope.

Kindle Unlimited actually works… for me, at least

Given the furore surrounding Amazon’s new fraction-of-a-penny-per-page royalties system, I was understandably apprehensive to sign up for Kindle Unlimited exclusivity. But hey, it’s worked for me, and I’m getting a consistent number of readers (or pages read) per day. It’s also gives lonely this writer a fuzzy feeling knowing that someone somewhere just read 57 pages of one of his books.

My only issue with Kindle Unlimited’s sales model is the oath of exclusivity to Amazon it requires. I don’t like being told where I can sell my work, and it’s perhaps a worrying sign of things to come. But to give a new eBook an initial readership boost, it’s certainly worth signing up for the first 3 months.

I’ve thrown a few quid at every possible advertising method and social media platform, but the best form of advertising, at least for me, has been a simple Twitter announcement. I guess that’s indicative of the true power of social media: the increased trust that your followers feel towards you after enduring your drivel for several weeks/months/years. When you advertise online you are presenting your work to suspicious (and likely uninterested) strangers, but blog posts and tweets lend you a small measure of authenticity.

Anyway, that’s about it for now. Onwards and upwards, as they say. I plan to post here on weekly basis, and share my self-publishing woes with the rest of the world. And, of course, my small successes, even if they’re not quite as fun to rant about.