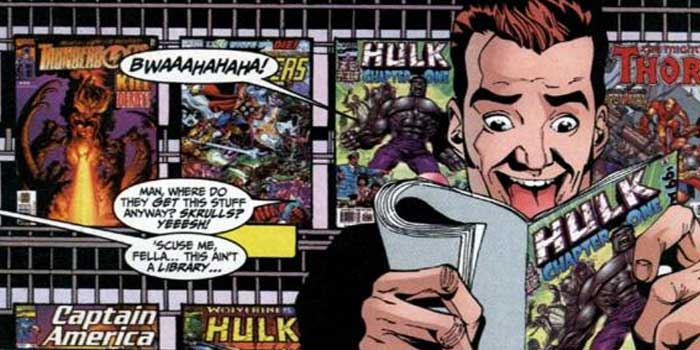 Comic book readers are a frightening bunch. You only have to visit the forums on any number of sites to discover hateful comments formed with all the rationality of a five year-old on LSD. IGN’s crowd are an especially bitter bunch, spewing hatred at the poor bastards who have only a limited time to write something that somebody, somewhere will want to read. It’s not uncommon on IGN to read comments demanding that a writer be fired for penning a piece that opposes marvelfanboy63’s fanaticism, or even wishing them dead.

When I set up my own little corner on the web, I originally decided against a comments section. The articles I wrote weren’t abrasive enough to warrant arguments; I’m not sure they were even interesting enough. I don’t handle complements well, either, though I rarely get any so it’s never really an issue. And I certainly didn’t want to provide an outlet for dubious gits offering free iPads to the first ten people to send them their bank details.

Anyway, it often seems to me that many so-called comic fans don’t like comics; by which I mean the comic as a medium, a storytelling art form that is as diverse and artistically valid as prose, theatre or cinema. Sequential art, if you want to be fancy. Rather, such fans cling to precious childhood memories, to the Hulk vs Superman scenarios that once passed school breaks, only to suffer the inevitable bitterness in adulthood when the contemporary books they read don’t live up to the rose-tinted experiences of their childhood. Those same consumers who splash the most cash on their pastime seem to gleam the least enjoyment from it, and continue to splash it at the two publishers who deserve it least.

And then there’s gamers, a community whose loudest members are so misogynistic and blinkered that you have to wonder if they’re not Jeremy Clarkson-inspired fictional parodies. I love the concept of MOBAs, but never progress beyond the point where I’m expected to endure the vitriol and selfishness of other players. It broke my heart when Super MNC, a fun and extremely silly take on The Running Man, collapsed, but given that I had to “watch” a team comprised of strangers repeatedly tell a rookie member to “go die of cancer”, maybe it’s for the best.

I’m not a great critic, and I’m sure I never will be. And it’s not for lack of understanding or literary skills that I fail (I hope…), but for an inability to routinely criticise everything I read. I do genuinely enjoy the majority of comic books I read; why would I continue to read them on a daily basis if I didn’t? Why do so many critics, be they professional or armchair, vent such taste for their self-proclaimed passions?

Things are changing, though. Comic books, kids, have only recently become the crux of the monumental community events that you and I enjoy today. Even a decade ago, conventions were far smaller, less integrated with movie and gaming conventions, and much less rife with people in costumes.

On that note, I’ve never much cared for cosplay or conventions, though I sincerely wish anyone who does the best of times. Just as with online gaming and the level of commitment and social engagement it requires, they are both things I can’t quite get my head around. To me comics are still very much an insular indulgence, and I read them to escape the outside world. I don’t need to meet other readers (or even readers of my own literature) to carry on getting that enjoyment.

But it’s not all bad. My experiences on Twitter have, much to my surprise, been overall been positive. Why, just the other day I had a conversation with a complete stranger, about comics, that didn’t end in insults or either party evoking Godwin’s Law. As geek culture (a term I admittedly loathe) becomes an increasingly bankable, mainstream thing, and those who fuel it push for greater inclusion, that zealous fanboy attitude will hopefully become a whisper rather than the overbearing ruckus that too often drowns out all rational appreciation of the craft and form.

Anyway, against all common sense I eventually allowed comments on this WordPress-created abomination I call my digital home. I’m sure none of the strangers who paddle these murky waters will want to make a comment, but if you do, it’ll be appreciated. Or don’t, I genuinely don’t care.

Just remember: be kind, and if you can’t handle that than at least be polite. Manners make the world that little bit more bearable.