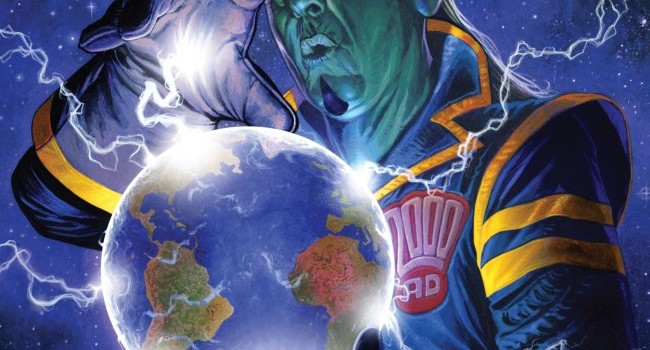 As someone who spent the past three years advocating the virtues of indie and self-published comics, I often feel quite ashamed with how few non Marvel/DC titles I actually purchase each week. Point in case: the seminal 2000AD, which I have not actually bought in nearly a decade, despite the fact that many of the early stories published within pretty much got me hooked on comics in the first place.

When Rebellion re-published many of the classic serials such as Rogue Trooper, A.B.C. Warriors and Bad Company, there was definitely something missing, with the once sharp sci-fi allegories having lost their flavour over the years. I’ve been too terrified to further soil my nostalgia since. Prog 1650 is a jump-on issue, with each of the stories starting anew, and three tales rather than the usual five. The perfect place to rectify my wrongs, then. Of the three opening chapters, John Wagner’s Judge Dredd tale ‘Tour of Duty’ was by far the most engaging. It’s nice to see that the magazine’s knack for allegory has not been lost, with this tale tackling the apartheid… but with mutants. Relocated to the Cursed Earth, a chastised Dredd has been ordered to oversee the building towns which will allow mutants to technically reside in Mega City. Dredd has become comparatively solemn over the last few years, and while the character has always worked best as a middle finger to 1970s Tory rule, Wagner and MacNeil packed as intriguing a introduction into a mere six pages as could possibly be expected.

Robbie Morrison and Henry Flint’s uncharismatic killing machine Shakara returns in ‘Destroyer,’ the heart-warming tale of an alien being intent on obliterating the fascist galactic empire that brought its race to extinction. Flint’s artwork is exceptional, with the now commonplace black/white/red colour scheme used so effectively that it almost feels original nice more. But great monster designs and fabulously depicted space battles aside, there’s little to get excited about here.

Finally, prolific Warhammer novelist Dan Abnett brings us Kingdom, which is also difficult to get enthused by. Set in post-apocalyptic Sydney, it continues the adventures of Gene the Hackman, a genetically engineered dog-soldier, and his young companion Leezee Sower, as they seek safe haven from insectoid monsters known only as Them.

Nevertheless, it’s reassuring to see that 2000AD’s high visual standard has been maintained, and while neither Shakara or Kingdom are likely to ever reside beside the anthology’s finest tales, they still display a level of vivacity missing from many American titles.