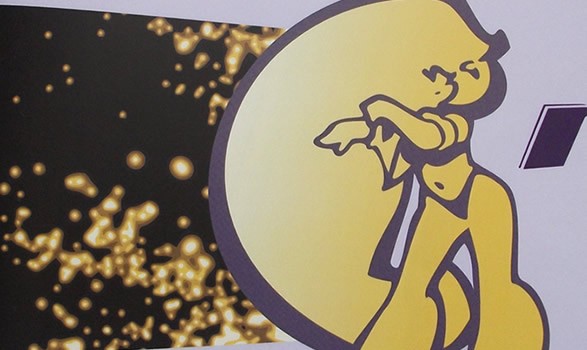 Yes, it’s a silly, surreal adult comedy about a ditsy catering officer and her talking knickers, which not only contain an on-board artificial intelligence but their own opinions and consciousness. The supporting cast is only slightly less underwear orientated, and somehow tolerate Space Babe’s tendency to masturbate with any object vaguely resembling a phallus. There’s also the villainous Grand T’Kleep, a wrathful deity that just happens to resemble a sex toy, and is awoken by Space Babe when she decides to take it for a test drive… it probably goes without saying that Space Babe 113 is definitely not for kids. Space Babe 113’s website has a wonderful disclaimer warning that the series features “lashings of abstract cartoony nudity,” which pretty much says it all. Maybury’s art is distinctly minimalist, with the titular heroine formed from just several curvaceous lines. To riff on Dolly Parton’s infamous retort “it takes a lot of money to look this cheap,” Maybury’s abstract character designs require far more artistic ability than one might initially appreciate. His stylised art also, perhaps most importantly, disguises the level of nudity present in Space Babe 113.

The series follows a unique page layout, with each and every page adhering to a twelve panel grid, which has allowed a colour version of the series to be adapted for mobile phone at ROK Comics. Here’s a preview:

Alternatively, b/w physical copies of Space Babe can be ordered from Soaring Penguin for £2.40/$3.95.