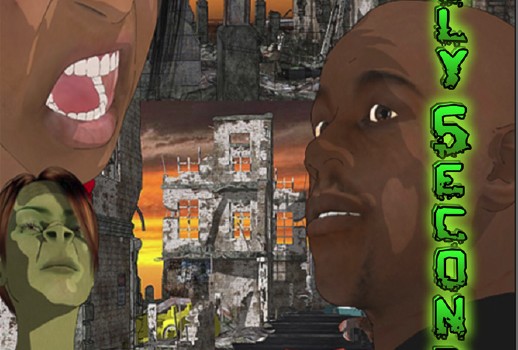 When I first set up shelfabuse.com, I vowed to extensively review every new indie comic or book sent my way; it didn’t then occur to me that there’d actually be a point where I’d have to start turning books down. Well, that time is now, and with the site presently receiving around 2-3 submissions a day, I’ve now become that which I hate the most – the sort of bastard who doesn’t dignify all his emails with a reply.

So, the in the first of what looks to be a regular feature, here’s a few new indie comics – actually, two of them are by definition illustrated books – that might be worth a look. If you’ve read them yourself, please leave a comment.

Alan Cooke’s debut Deadly Seconds: Child of the Spirit Demon sees hapless everyman Marcus Bailey dragged into a world of cyborgs, time travel and demons. Cooke’s visuals use 3D models rather than illustrations, which seems to be an increasingly popular way of getting a one-man project out there.

For more details on Deadly Seconds, including character bios, visit www.deadlyseconds.co.uk. For those in the London area, Foyles of Charing Cross Road are currently stocking the book. 320 pages, full colour, £14.99. Andi Green’s The Monster Who Couldn’t Decide is not a comic but the fourth in her series of WorryWoo Monsters illustrated children’s books. This one stars Fuddle, a boggle-eyed beastie who finds herself more than a little overwhelmed by life’s many options. The eye-catching pencil and watercolour illustrations will definitely appeal to little human monsters, and the book’s overall message is likely to hit home with a few indecisive adults, too.

Each book comes with its own soft toy, and a special Limited Edition of The Monster Who Couldn’t Decide (1000 copies only) is currently available at www.worrywoos.com. Fuddle: The Monster Who Couldn’t Decide

‘All of the characters in this book are dead’ begins Gregory Pastore’s Everybody Dies in the End, a decidedly more macabre picture book. There’s a lot of variety in this collection of darkly humorous poems and short stories, all of which explore… you guessed it, death.

A 28 page preview is available at www.everybodydiesintheend.com, while the book itself will be available from August 11th 2010. Everybody Dies in the End

Last but most definitely not least, the third issue of Jamie Gambell’s 4-part supernatural horror miniseries Omnitarium is available up at IndyPlanet (print editions) and DriveThru Comics (digital editions).

This Victorian-set prison horror is a great little series, and J.C. Grande’s immensely atmospheric art seems to get better with each page. Digital copies of Issues 2 and 3 are currently available for just $0.99 each, and the first issue of Omnitarium can be downloaded for absolutely nothing from Jamie’s new website at www.omnitarium.net.