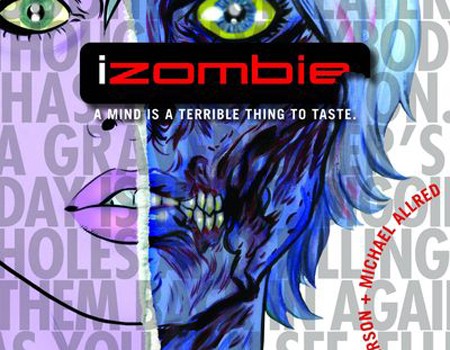 iZombie is an odd first issue, in that for a title debuting at an alluring $1 it offers little in the way of a hook, or any reason that readers might want to return next month. That isn’t to say that it’s a bad first issue by any means, but it’s difficult to form a substantial opinion of from this issue alone. The series centres on Gwen, a pallid gravedigger who also inhabits the cemetery where she works. Here she socialises with Ellie, the ghost of a 60s blonde bombshell in an Emma Peel chequered dress, teases the local werewolf boy, and snacks on the brains of the people she’s just buried. Gwen’s a zombie, see.

I originally intended to refrain from revealing this last detail, as Roberson (Cinderella: From Fabletown with Love) only discloses his protagonist’s undead nature on the last few pages, but I think it’s safe to say that the title of the book and Allred’s cover already give this little twist away. One interesting aspect of Gwen’s diet is that she receives the memories of the person she’s just ate. In this particular case the recently deceased was murdered, and Gwen vows to find his killer; which looks to send the series in a similar direction to Pushing Daisies.

There are also several other subplots. One concerning vampires sucking on paintballers, and a scene with two shady types (one has a scar across his face, so we’ll assume he’s a wrongun) investigating the increase in “post-mortem activity” in the area. Both of these moments feel as though they could have been left until issue 2, and diminish Gwen’s introductory tale somewhat.

Mike Allred’s inimitable pop-art stylings pretty much hold this issue together. His character designs and sense of storytelling are so unique that his attachment seems to dominate any project he works on even when he’s not involved in the writing. Roberson’s characters are still in urgent need of fleshing out, but I find it hard not to be smitten with anything or anyone Allred draws. Fans of Madman will definitely enjoy this book’s similarly quirky tone.

So, perhaps the question iZombie #1 warrants more than any other is; would I be so favourable to this series were it illustrated by someone other than Allred? Probably not, but I’m prepared to give iZombie the benefit of the doubt. It’s idiosyncratic enough to stand out from ever other zombie comic on the shelves, and for $1 there’s really no valid argument against picking up the first issue and making up your own damn mind.