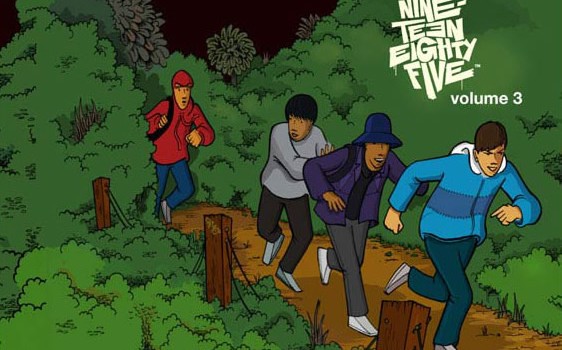 Anyone unfortunate enough to reach the age of thirty will tell you that your taste in fashion and music is forged during your teenage years and early twenties. After that, your passions either stay the same or, for the majority, are gradually diminished by the combined forces of responsibility, conformity and family. When I was in my teens I mocked those outmoded losers in their Suicidal Tendencies T-shirts, today I’m the one struggling to explain why the Wildhearts were so important.

James Reitano’s Nineteen Eighty Five, and its account of a group of graffiti artists in the mid-eighties, is all about recapturing this euphoria of hopeless rebellion; when our enthusiasm for comic art, skateboarding, music or dancing was enough to assure us of future renown and eventual global domination. Each volume is preceded by the familiar “Any similarity towards any persons living or dead is purely unintentional” disclaimer, but it’s clearly largely autobiographical, and as such is imbued with a strong sense of nostalgia throughout.

This is clearly a labour of love for Reitano, who has worked for Santa Cruz Skateboards, the Wu-Tang Clan and Spike TV, directed music videos for the likes of Kool Keith and Cut Chemist and now runs design and animation shop TFU Studios. There’s not a lot of money in comic books that don’t slot neatly in the superhero, horror or fantasy genres.

Surprisingly, particularly given the series’ premise, James Reitano’s finely inked art and storytelling sensibilities are more reminiscent of European comics than American. Nineteen Eighty Five is also a far more gentle story than the graffiti subject matter might suggest, with protagonist Count and his graffiti buddies fuelled by a need to create art and express themselves rather than deface property. To call Nineteen Eighty Five’s leisurely paced would be an understatement. Instead, this series offers more of a snapshot into a brief period of time; a wistful document of an era that will never be recaptured. It perhaps goes without saying that to fully appreciate such a title you need to have been there, though graffiti, old school hip-hop (presumably it was new-school in the 80s) and b-boying still have enough relevance to sustain readers under the age of forty.

Each issue comes with a ‘suggested soundtrack’ CD, in the case of volume 3 a lengthy mix by DJ Imperial that features a medley of such 80s artists as Black Flag, Talking Heads and the Beastie Boys. With 30 tracks remixed and compacted into 45 minutes, it’s a brilliant concept that not only perfectly complements the series itself, but offers an access point for anyone unfamiliar with the music of the period. Though it might have been more appropriate if, against all logic, Reitano and company had managed to fit a cassette tape onto the inside back cover.