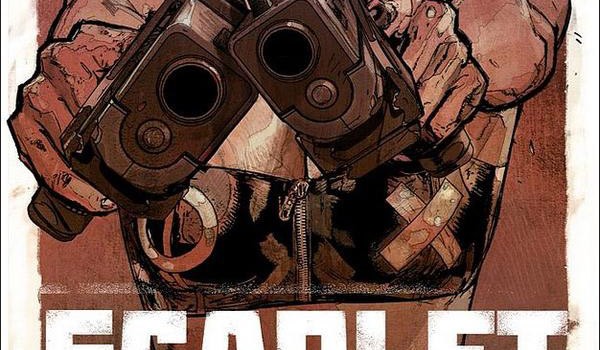 With the Bendis brand slapped across so many Marvel titles these days, most readers have probably become accustomed to his schizophrenic output. For every Secret Invasion there’s an Alias, for every reader who balked at the very idea of an Ultimate Spider-man there’s a Powers. You may not like all of his work, but you generally know which Brian Michael Bendis you’re getting before you’ve paid your entrance fee. Scarlet, the latest creator-owned series from Bendis and co-creator Alex Maleev (Spider-woman, Daredevil), isn’t so easily categorised.

The series introduces a more grounded vigilante than we’re used to, the titular Scarlet, a once passive student turned cop killer after her boyfriend is shot in the head by a corrupt officer. Scarlet, beautifully brought to life by Alex Maleev’s art, frequently breaks the fourth wall, recounting to us humble flies on her wall everything from her birth to the tragedy that changed her life forever. Issue 1 is an odd book; nigh-on impossible to categorise, and quite unlike anything Bendis has written before. Is that a good thing? I really don’t know. This is either the pretentious babble of a writer who’s got too clever for his own damn good, or a unique and refreshing take on vigilantism. Unlike Powers, which grabbed us from the first few pages with its genre-mashing and snappy dialogue, Scarlet’s debut is a meandering origin story that doesn’t really give us any indication as to where the series is heading.

Scarlet herself isn’t particularly inspired, or indeed as sympathetic as she needs to be, and there’s something quite nauseating about the nonchalance with which Bendis justifies the murder of a police officer. Garth Ennis writes the Punisher so well because he realises that Frank Castle is not someone you’d ever want to be. As entertaining as Castle’s bloody rampages are, he’s always portrayed as a soulless killing machine, and warped far beyond redemption. Here, we’re expected to sympathise with Scarlet and, I suspect, get a kick out of voyeuristically peering in on the fiery redhead’s revenge.

Or at least that’s how I interpreted it. Scarlet occasionally addresses the reader, at one point telling us how we too will become tangled up in her onslaught against Portland’s scum. Which could lead to a cop-out in issue 2, when it transpires that she was just talking to someone off panel, or to something generally original. But then that’s always the thing with Bendis’s writing; it could go either way.