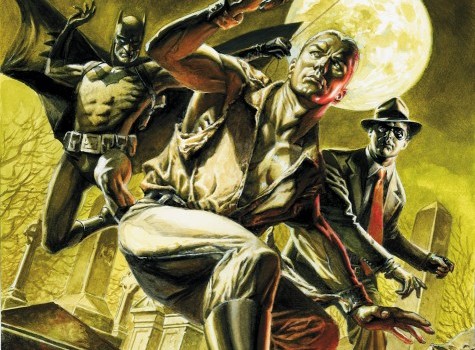 When DC resurrected Will Eisner’s The Spirit, the job went to the only man who could; Darwyn Cooke, whose retro-stylised lines and storytelling sensibilities already reflected the optimism of the late 40s and 50s. As with the Spirit, Doc Samson was recently welcomed back into the fold though a Batman crossover one-shot, but this time as part of Brian Azzerello’s First Wave brand – an alternate history inspired by the pulp comics of yesteryear. The first issue in this 6-part miniseries, which will be used to usher in new ongoing series for both Samson and the Spirit, is an odd introduction to this pulp universe that ultimately left me feeling cold.

Azzerello wisely removes Batman from the picture for this premier issue, allowing readers to get accustomed to the two lesser-known protagonists, but only the Spirit has any standout moments. Currently, only a South America subplot involving an explorer, a killer robot and a group of villains known as the Red Right Hand looks to bring our trilogy of franchises together. But currently, we’re in typical Azzerello territory; an intricately scripted noir drama that will probably read far better when compiled.

So why the low score? Something here just didn’t sit right with me. While Cooke’s take on The Spirit was colourful, witty fun, First Wave so severely caters to a mature audience that it lacks the sense of adventure and whimsy that made these enduring characters so appealing in the first place. And it’s hard to take any book featuring a robot that’s equal parts Iron Giant and King Kong at all seriously.

Nevertheless, Rags Morales’ sharp pencils triumphantly capture the series’ principle of old done new, and Azzerello’s writing is as solid as ever. It’s just a bit of a shame that Azzerello chose to tackle a project as potentially seminal as First Wave with his brain rather than his heart.