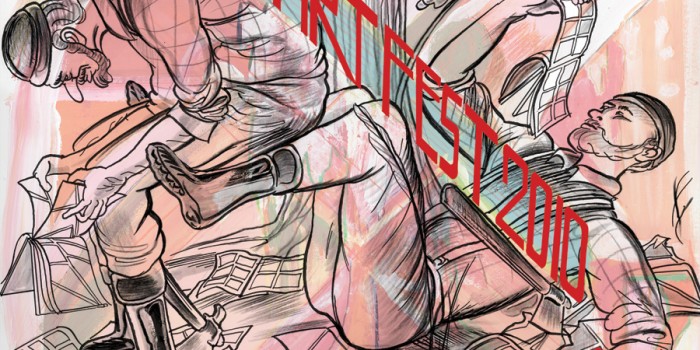 Jason Ciaccia and Aaron Norhanian will debut their graphic novel The Sinister Truth: Mkultra at the Museum of Comic and Cartoon Art’s MoCCA Fest 2010, on April the 10th and 11th. Do ya like comic books?  Are ya inta conspiracy theories?  Ever been to Cuba?  Would ya rock a beard like Fidel Castro?  Do ya go ga-ga over JFK’s lusty libido?  Hear about the CIA mind control experiments?  Wonder what it would be like to be inside an isolation tank?  Tried LSD?

If ya answered yes to any of the questions just posed to you, then I guarantee you will get a kick outta The Sinister Truth: Mkultra! The debut graphic novel from Jason Ciaccia & Aaron Norhanian!

Our worldwide premiere happens this weekend in New York City at MoCCA FEST 2010!  We’ll be there LIVE & IN PERSON signing various body parts & handin’ out free ice cream cones with every purchase!

For more info on The Sinister Truth and MoCCA Fest 2010 visit www.sinistertruth.com and http://www.moccany.com/content/mocca-festival, respectively.