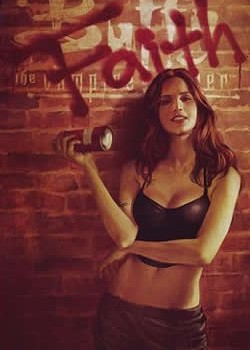 Though it was far superior to IDW’s Angel series After the Fall, the opening volume of Buffy Season 8, The Long Way Home, definitely lacked the fluid wit of its television successor. Joss Whedon’s postmodern dialogue was intact, as were many of the little nuances of character interactions that the show did so well. Unfortunately, the flimsy plot, comprising of several cameos and a tedious large-scale battle, did little to justify the franchises resurrection in funny book format. Buffy the Vampire Slayer Season 8 vol. 2: No Future for You

Many fans will have already bewailed Whedon’s departure from scripting duties just 5 issues into the series (though he returns for issue 10), but his replacement, Y: The Last Man and Lost scribe Brian K. Vaughan is as suitable a host as we could possibly hope for. Vaughan’s dialogue isn’t as witty as Whedon’s; he often pushes the pop culture references a little too far. Nor does he write women nearly as well. He can however, pace a far better, and as a result No Future For You is a far more directed, absorbing read than Whedon’s initial fight fest.

Slayer gone bad-then-good-again Faith takes precedence this time around. Still wanted for the murder of Deputy Mayor Allan Finch waaay back in season three of the show, she’s now split from Robin Wood and resumed her usual self loathing. When Rupert Giles offers her safe passage from America in exchange for an assassination job, she accepts. The mark in question is the ridiculously named Lady Genevieve Savidge, a spoilt English aristocratic Slayer who has fallen under the influence of Irish warlock Roden. Genevieve is like Paris Hilton mixed with Princess Di, and more unhinged than both put together. I doubt Vaughan has ever been to England; his idea of us Brits follows the hackneyed foxhunting, tea-sipping well-to-do stereotype that much of the world enjoys portraying. Not totally unlike Giles or Wesley, then, I guess. But then I’m a peasant who rarely leaves my home – where I’m from, a trenchcoat sporting, chain smoking scumbag like John Constantine is closer to the mark.

But for a brief glimpse of his shiny black boots, The Long Way Home did not so much introduce as hint vaguely at the new Big Bad, Twilight. He only appears for a single page here, to provide the usual villainous mastermind monologue, complete with the obligatory chess analogy cliché. Despite looking like a little like a Power Ranger in a flak jacket and trench coat, Twilight has cast an impressive shadow over the proceedings so far, but it remains to be seen if his plans are any deeper, or more inspired, than the routine destruction of humankind.

Whedon’s contribution, ‘Anywhere But Here’ trails somewhat pathetically behind Vaughan’s central plot. I should offer a short synopsis, but after rereading the issue a second time I still had nary a clue what was going on… but then I am a moron. Willow has gone through some changes since the show’s closure, and seems to have been allocated the dual role of perpetual exposition uttering techie type – magic-babble, if you will – and resident deus ex machina. In just ten issues her powers have saved everyone twice over. Though this is a natural progression from themes introduced in the television show, having a near omnipotent ally at hand has cheapened every conflict so far.

Still, the series is steadily finding its footing. It’s taken some time, but I’m finally adjusting to the Scottish Highlands backdrop and the notion of a highly organised, global Slayer army. Georges Jeanty’s continues to impress too, capturing the likeness of each actor in both butt-kicking and farcical modes, while still adhering to a clean and recognisably “comicy” style. Roll on volume 3.