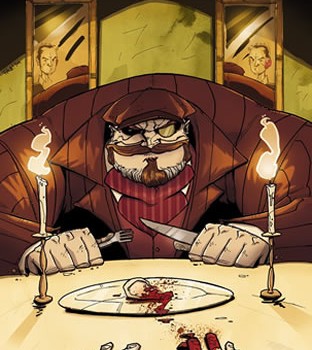 Detective Tony Chu is a cibopath – a telepath whose psychic abilities are connected to his taste buds. When Tony eats an apple, he visualises it being plucked for the tree. When he eats meats, he’s left with far more horrific recollections. After a strain of bird flu killed over 100 million people worldwide the breeding, selling or eating of chicken is now strictly prohibited, and when Chu’s partner is wounded in a raid on an illegal poultry restaurant, he’s enlisted into the FDA by the verbose Agent Mason Savoy, a fellow cibopath who has a long list of unsolved murders awaiting Chu’s palate. How’s that for an original concept? And given the fuss surrounding John Layman’s wickedly funny new series, you’d be forgiven for dismissing Chew as another indie oddit, yet from the moment Taster’s Choice begins there’s the subtle sense that you’re reading something pretty damn special. Not since Ennis’s Preacher has a comic series blended gross humour and amiable characters to such brilliant effect.

Surely one of biggest hurdles for any comic writer looking to bring their unique property into the world is pacing a series so that it reads well in both a monthly and collected format. Layman excels here more than with any other element of Chew; like TV series such as The Shield he’s managed to balanced standalone episodes with snippets of an ongoing arc that looks to continue into Volume 2 and beyond. Only at the tangential fourth episode – a blood-soaked trip to the Arctic Circle – does Layman’s perpetually inventive narrative falter a little, and even that’s still a more than satisfying read.

Again, the characters here are excellent. Diminutive, ineffectual but good natured, Chu is the antithesis of the buff everyman lead that seems to dominate ninety percent of books on the shelf, and I defy any reader who doesn’t sympathise with him as Mason Savoy – one of the most bizarre and incongruous creations you’ll ever read – sells him down the river. Co-creator Rob Guillory’s art pushes these personalities beyond the realm of caricature (Savoy is about five times the size of Chu) with facial expressions so fantastically rendered that I found myself retuning to previous pages just to laugh at Chu’s ever declining predicament.

There’s not a lot more that can be said about Chew without wandering into spoiler territory. Taster’s Choice is one of the most memorable and downright hilarious new series you are likely to read this year. A mere five issues in, Chew hasn’t quite earned the accolade of a classic series yet, but Layman is clearly imaginative enough to glean far more mileage from this novel but potentially gimmicky concept that could easily have felt like a one-note joke.