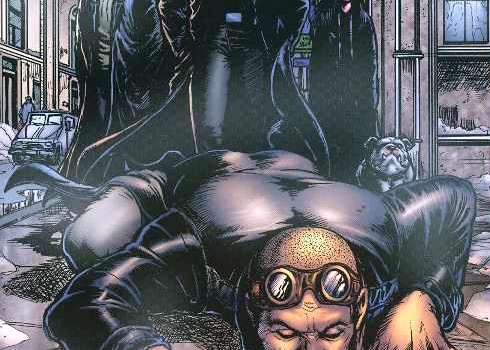 Welcome to Comic Book Cramathon, the first (and hopefully not the last) in a series I’ll be sporadically running. The basic challenge I’m setting for myself is to review a series within a week; be it a series I overlooked, underappreciated or completely misunderstood during its early years, or a run that I’ve been buying for the past few years but have yet to read – a habit I’m sure pretty much anyone who decides to burden their existence with the joy of comic collecting can appreciate.

First up is Garth Ennis’s controversial The Boys, which on release was hyped up to be the next Preacher. Instead, at least from the impressions the first few issues gave, it turned out to be a violent and extremely gratuitous superhero parody with little of the charm that always buoyed Ennis’s dark humour in the past. I recall getting through the first five-or-so issues of The Boys, but the amoral characters, foul language and overall misogynistic tone left a bad taste in my mouth, so I stopped there.

With the series now on its seventh TPB volume, here’s hoping time will prove me wrong. Or maybe not…

Volume One: The Name of the Game introduces us to Scottish conspiracy nut Wee Hughie, whose girlfriend is (literally) torn from this world when two feuding superhero disrupt a day at the fairground. Hughie is offered a shot at retribution by shady Brit Billy Butcher, and his black-ops team known as The Boys; a group of super-powered ruffians in black trenchcoats who enforce the costumed heroes. Filling out the team are the reserved Mother’s Milk, comical Gallic stereotype The Frenchman and The Female; silent killing machine and evidently disturbed soul. Oh, and Butcher’s dog Terror, who much like his owner is prone to fucking everything in sight.

Oddly enough, so is everybody else. In fact, the only character in the series who isn’t a nymphomaniac or sexual deviant is Hughie, who, at least initially, provides a moral compass of sorts. We also meet naive super Starlight, newest member of The Seven, an obvious analogue of the JLA, and witness the sexual degradation she undergoes to make it as a major league superhero. After Hughie is unwittingly injected with Compound V, a serum that lends The Boys powers comparable to the capes they hunt, the team face off against Teenage Kix, a low ranking super-team, and presumably a take on the Teen Titans, which ends in a bloodbath. The Boys Volume One: The Name of the Game

If you can manage to take the childish gratuity for what it is, there’s a lot to like in The Boys, a lot more than I initially appreciated. Darick Robertson’s art is the ideal companion to Ennis’s dark humour, and the use of Simon Pegg’s likeness for Wee Hughie may be somewhat off-putting at first, but lends him an everyman presence that anchors the series in its most outrageous moments… of which there are plenty more to come.

Volume Two: Get Some kicks off with Butcher taking Hughie to meet the Legend, the aged creator responsible for creating the comic books that sustain the supers’ image of wholesomeness to the general public. The Legend is essentially a dirty and honest take on Stan Lee, idiosyncratic speech intact, and the metaficitonal element that Ennis has begun weaving into his tale is a sign that this series will go in more interesting directions than the first volume suggested.

The Legend asks Butcher and Hughie to look into a case of a murdered homosexual lad, a case which leads them to Tek-Knight, an Iron Man clone who has taking to buggering anything and everything in sight, from melons and cats to his teenage sidekick. Yup, we’ve descended back into the territory of jokes about homosexuals and paedophilia. That said, Ennis is smart enough to bring a sense of morality to their investigation, and the Tek-Knight’s send-off is six pages of comic genius. The Boys Volume Two: Get Some

The second half of volume two, ‘Glorious Five Year Plan’, sees the team head to Moscow, where they team up with retired hero Love Sausage – there’s really no need to explain the origins of his name – to take on Little Nina, a villain who’s planted detonators in 150 Europeans supers as part of a pretty ingenious scheme. In typical Ennis fashion, Little Nina is also a serial masturbator, while we also find out that Butcher’s CIA contact, Kessler, has a fetish for disabled women.

This pretty much sums up The Boys two volumes in; it’s a series that is equal parts intelligent and smutty. The ideas and humour don’t always hit the mark, but when they do the results are nothing short of brilliant.