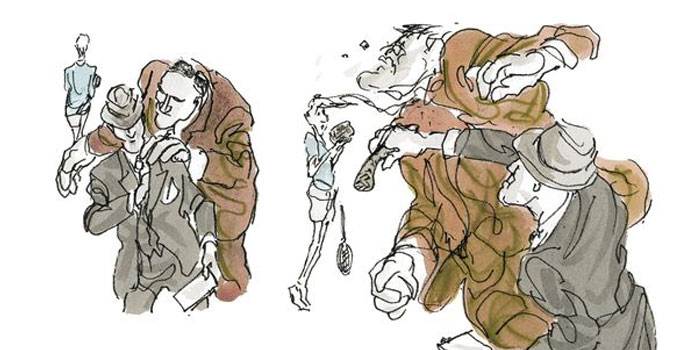 I should probably begin this review by stating that I hadn’t read the first book in Jules Feiffer’s noir trilogy, Kill My Mother, prior to reading Cousin Joseph. Nor was I aware of the reputation that precedes Feiffer, the Pulitzer Prize-winning cartoonist and prolific writer of books and screenplays (including, of all things, Altman’s Popeye) who has seemingly tried his hand at every art form imaginable, and in his mid-80s is delivering what some consider to be his opus.

Feiffer’s style is as scrappy here as in his cartoons; one Amazon reviewer aptly describes the book as “like it was drawn on a ship during a storm”. It’s equally unruly in its storytelling, the work of a veteran who’s discovered a fresh angle from which to approach his craft, and frequently channels the energy and ingenuity of a younger talent.

The multilayered story, which orbits crooked Detective Sam Hannigan and his role in quelling labour union disputes at a cannery in Prohibition-era Southern California, is likewise diverse and enthralling. By far the most fascinating element is the titular Cousin Joseph, an enigmatic agent of change who uses the hard-boiled Hannigan to dissuade Hollywood’s filmmakers from producing movies with overtly liberal themes or messages. This second volume is set in 1931, twelve years prior to Kill My Mother. Those who’ve read that first instalment will already know Hannigan’s fate, yet I didn’t once feel as though I was missing anything by experiencing this prequel first. Given the inconclusive ending, however, I get the impression that Feiffer is less interested in divulging secrets just yet than painting a feverish portrait of a period when America’s values were a precious commodity, paranoia ran high and Hollywood represented some small relief during the Great Depression. Hannigan follows Cousin Joseph’s orders not for money, but for love of his country, his anti-Semitism is exploited in the name of an agenda he might otherwise oppose.

Feiffer has cited Will Eisner as an influence on the trilogy. While many other creators may make the same claim, here the influence is a little more direct; Feiffer worked for Eisner for nearly a decade, providing speech balloons for the legendary creator and eventually acting as a ghostwriter on The Spirit. It’s no surprise, then, that Cousin Joseph has drawn comparisons with Eisner’s work, and its depiction of 30s disillusionment, ethnic identity and bitter affection for a pre-World War II America at times make it feel like the spiritual successor to the seminal A Contract with God trilogy. It’s not quite in the same league, but what is? Regardless, if the concept of the double feature applied to comic books, such a pairing would be a match made in Heaven.

I’ve already ordered a copy of Kill My Mother, and eagerly await the final volume in the series, though I suspect that this is a trilogy one can’t fairly judge until it’s published, and indeed read, in its entirety.

This review was taken from an advance reading copy of the book, which may differ from the final published product.