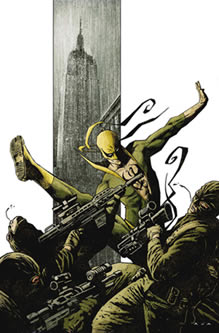 Every great superhero has his defining moment, an essential work which all fans of that hero will have read. Some of the greatest have several. Miller’s Batman: Year One established the Dark Knight’s origin for the Modern Age, while The Dark Knight Returns envisioned that rarity in comics: closure. Moore’s Whatever Happened to the Man of Tomorrow? was essentially a remembrance of everything that made the Silver age Superman fine, but it was the Kryptonian’s death, and inevitable return, that made us appreciate a world without him. Unfortunately, seventies throwback Danny Rand / Iron Fist, has no definitive adventure whatsoever. Iron Fist has never been a memorable superhero – until recently, I’m not sure he’d even been a good one – but with The Last Iron Fist Story, Ed Brubaker and Matt Fraction have crafted a mythos the kung-fu fighter can be proud of. Spanning (albeit briefly) almost ten centuries of Iron Fist lineage, this mythical tale sees Rand encounter his predecessor Orson Randall, an older, harder Iron Fist who’s power has only give him torment. Together they tackle the indoctrinated force of Hydra, an antagonistic presence that has been mercifully underused of late.

Had The Last Iron Fist Story been a film adaptation, the “passing of the torch from one generation to the next” formula would have hit all the wrong notes. But as a revitalisation of a long expired commodity, it’s near perfect. Under guidance of Brubaker and Fraction, Daniel Rand has made the transformation from Luke Cage’s lame white sidekick to the most intriguing Marvel lead since Brian Michael Bendis’ Daredevil.

With such a large assortment of artists involved, it’s remarkable that the book’s imagery stays so cohesive, avoiding the visual disarray of 52 and Countdown. Huge thumbs up to the new costume design, too; David Aja has given Rand a contemporary redesign that is instantly recognisable without compromising the original’s distinctive features in any way. A selection of sketches at the rear of the book show just how much consideration was put into the story’s visuals.