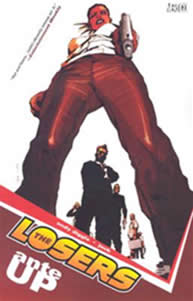 Were you to whistle the theme tune to The A-Team while reading Ante Up, I doubt Andy Diggle would be in the least offended. An update of DC’s long forgotten Special Forces group, Diggle’s Losers are an A-Team for the 21st century, a team of America’s finest who were double-crossed by their government – in this case, clandestine organisation “the Company” – and are out to bring the system to its knees. The Losers vol.1: Ante Up

What separates Clay and his team from Hannibal & co is the foul-mouthed dialogue and graphic violence ubiquitous to all recent Vertigo titles but Fables. Diggle grounds his team firmly in reality – comic book reality at least, if such a thing exists – only to throw it aside when the opportunity for ball tot the walls violence presents itself.

With the exception of motor-mouthed hacker Jensen (tech savvy but not unopposed to the odd fire fight) the team lack the individual personalities that such a title deserves. Middle Eastern sociopath Aisha is where Diggle’s subversive principle’s falter. Aisha compensates for a harsh upbringing in Afghanistan by killing as many Americans – but no, wait, bad Americans – as possible. Thought the team initially use non-lethal tactics, when backed into a corner they are more than happy to kill scores of lackeys.

Still, it’s riveting, ballistic stuff. Diggle’s potboiler pacing is super-slick, with Ante Up’s incendiary finale featuring destruction on a scale large enough to give Jerry Bruckheimer a hard-on. There’s a dark humour to Mark Simpson/Jock’s effervescent art, with bullets giving their recipients a Swiss cheese makeover, but his characters suffer from indefinable designs; it’s often difficult to tell who is who.

Despite its intelligent scripting, Ante Up fails to garner any affection for its spurned black op mavericks; a shame, as otherwise Losers is a package of the highest calibre.