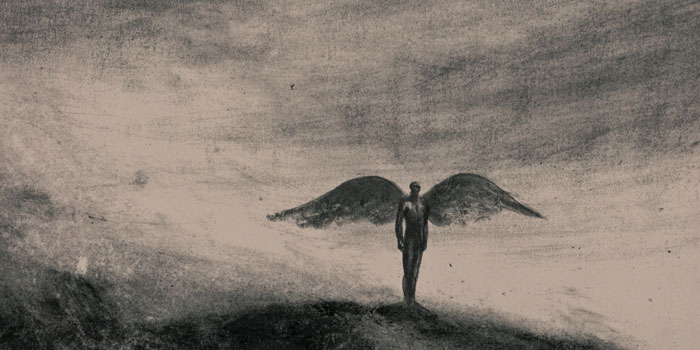 Paradise Lost, John Milton’s epic retelling of Satan’s role in the temptation of Eve, has always lent itself to visualisation. Gustave Doré’s ageless engravings are arguably almost as influential as the seventeenth century poem, as to a lesser extent are the interpretations by John Martin and William Blake.

But none of those artists ever attempted to illustrate the whole damn shebang. In adapting Milton’s colossal saga, here divided into four distinct cantos, Spanish artist Pablo Auladell (La Tour Blanche) attempts an equally epic undertaking. One that, like those renowned interpretations before it, is as much a product of its artist’s own imagination as it is an adaptation of Milton’s lyricism. This Paradise Lost offers a condensed adaption of those grandiose verses. Having not read the original work since my late teens, I say with a small level of uncertainty that Auladell’s take uses only Milton’s own words; though I suspect a few lines have been added for the sake of storytelling. Either way, graphic novels are their own medium, and perhaps what makes Auladell’s adaptation so striking is its willingness to take liberties without ever feeling as though it’s cheapening the source material.

Auladell’s art is beautifully bleak, intense and abstract. Rendering in graphite and pastels, he moulds the concepts of Heaven, the Garden of Eden and the “darkness visible” within which Satan gathers his legions, into a dreamlike landscape, one that forever redefines the terms of its reality.  His worlds and concepts shift and reshape in nightmarish fashion, with abstract imagery that piques the imagination but never provides enough substance to reduce Milton’s verses to rigid interpretation. Lucifer changes appearance from one panel to the next. At times, he’s a giant, at others a nebulous winged creature, and with some inevitability later assumes the form of the significant serpent.

Special mention must go to Auladell’s envisioning of Lucifer’s passage through the realm of Chaos, which Milton described as an impossible space that was every atmospheric condition and direction all at once. I won’t waste my time trying to describe those few demented pages, but they made my draw drop, and I found myself turning back to them again and again between reading. When dealing with graphic novel adaptations of prose classics, of which there currently seems to be an abundance, I tend to ask myself the same question: does this reinterpretation offer anything that expands on the original text? Replete with inspired moments and breathtaking art and concepts, Pablo Auladell’s Paradise Lost is certainly its own beast. Auladell builds on the notion of Lucifer as a tragic and all too human character, one whose fall from grace and acquiescence that it’s “better to reign in Hell than serve in Heaven” stems from his refusal to submit to an apathetic and distended God. A God whose distant assertion over Adam and Eve comes not from love but control.

Or at least that’s what I got from the book. Other opinions are available, probably.

Either way, Auladell’s Paradise Lost is a success. Those only vaguely familiar with Milton’s poem may indeed use it as a springboard from which to finally confront those intimidating blank verses, while those acquainted with the work will find it an unconventional but surprisingly reverential take on a classic that continues to be redefined by the bravest of artists.

Paradise Lost releases today, and is published in the UK by Jonathan Cape Graphic Novels.