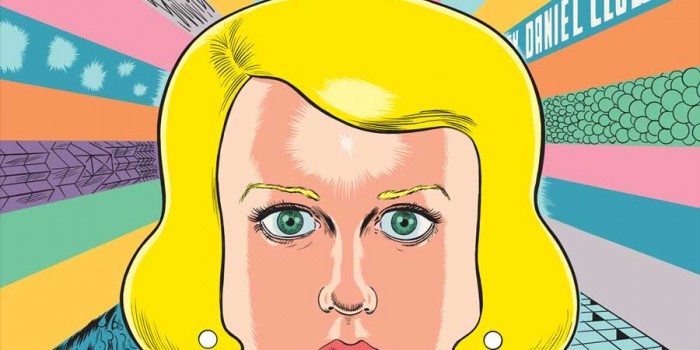 Daniel Clowes’ latest, Patience, is ostensibly a science fiction work, one steeped heavily in the sort of genre conventions befitting mainstream comics (albeit those of a bygone era), but seen through his warped lens it’s a time travelling odyssey that is ultimately anything but conventional.

When Jack Barlow discovers that his girlfriend, the titular Patience, is pregnant, the news only brings further strain to their life, with Patience admitting that there are things about her past that she is still unwilling to share, and Jack secretly struggling to earn an income worthy of his impending fatherhood. Then Jack returns home one evening to find Patience dead, and is wrongly arrested for her murder. Released a year later, he withdraws into isolation and grows increasing obsessed with finding the killer of his partner and unborn child.

The plot then hops forward, from 2012 to 2029, a bizarre and improbable near future of ray guns and blue-skinned prostitutes that’s a sort of nightmarish take on the Jetsons. Jack, still so fixated on finding Patience’s killer that he’s become unhinged and explosive, finds salvation when he comes across a geek named Bernie who may have invented time travel… Anyone who’s read more than two works of time travel fiction will be familiar with the direction the story then takes, with Jack getting tangled up in a paradox that sees him becoming further entangled in Patience’s history despite his every effort to avoid interference. The plot eventually sees Jack travel back to 2006, then later 1985, as he doggedly pursues prime suspect Adam, Patience’s abusive ex-boyfriend.

This is not exactly unexplored territory for Clowes; David Boring also wrapped its existential misery in a traditional murder mystery. But while Patience‘s concept is not especially original, this is still Daniel Clowes, who I’ve always viewed as the David Lynch of comics. Both have an adjective named after them, and no matter what they turn their hand to they make it entirely their own.

Here the genre trappings are embraced and more apparent, yet they do little to diminish Clowes’ greatest gift; that his repulsive caricatures hide rich, three-dimensional characters. In a medium that’s notorious for placing precedence on concept over character, Clowes does the exact opposite, delving deep into the psyches of crazed Future Jack and the younger Patience, whose teen years do indeed hold many dark secrets. Patience isn’t a manic pixie dream girl or a simple goal for Jack to achieve, but a conflicted and fascinating character, even if her own tale takes place predominantly in an established past.

The end result is a book that’s characteristically intimate but more plot-focussed than Clowes’ previous work. A book that sees its author mustering the blinding psychedelia of The Death-Ray (Jack’s displacement in time see him sporadically discombobulating though time and space), yet one that touches upon such familiar genre tropes as the hypothetical moral question as to whether one should travel back in time to erase Hitler. Or, as its blurb-of-sorts reads “A cosmic timewarp deathtrip to the primordial infinite of everlasting love.”

Before reading Patience I made the mistake of glancing at a few Amazon customer reviews that suggested it was the work of a Clowes past his prime. This couldn’t be further from the truth. Patience perhaps lacks the sublime timelessness of David Boring or Like a Velvet Glove Cast in Iron, and it’s unlikely that the book will prove as iconic as Ghost World, but that’s primarily down to the fact that the book’s central themes have been exhausted not only in similar science fiction fare but throughout Clowes’ own work.

However, this familiarity doesn’t take away from the work of a master of the form in his prime. Patience is one of the most provocative and memorable graphic novels I’ve read in a long time.