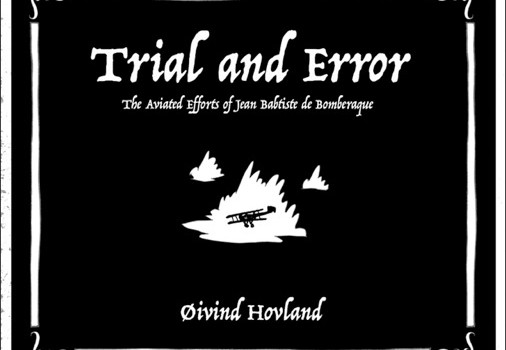 Oh to have lived in the era of madcap pioneers, an age when the boffins contributing to the advancement of mankind weren’t just academics in white overcoats but brave dreamers willing to risk life and limb in order to change the world. Trial and Error: The Aviated Efforts of Jean Baptiste de Bomberaque, a darkly humorous picture book from award winning artist Øivind Hovland, chronicles the endeavours of the titular aviator, a fictional inventor whose place in history, we are told, has been eclipsed by the Wright Brothers’s aeroplane design. Presented as a cross between a photo album and the intertitles from a silent movie, Trial and Error is a labour of love that’s anything but laborious to read. There are few words on each page, if any, but Hovland has a gift for telling mature stories with images alone. For example, in one fantastic double-page spread we see de Boberaque preparing for his father’s funeral; the opposite page shows the same interior but decked out with schematics of bizarre flying contraptions, and the accompanying text “life goes on.”

I read Hovland’s second effort A day in the Life of Alfred first, and while I felt that to be a deeper and more touching read (if a book with so few words can be defined as a read), this tale of aerial obsession is by far the more charming of Hovland’s two picture books. It’s a little costly for a book you’ll read in minutes (£11.99 for 32 pages) but it’s a purchase you’ll want to return to again and again.

I originally set up shelfabuse.com purely with conventional, “panels and speech bubbles” comic books in mind, yet frequently I receive books that are hard to categorise – not that art or literature should fit neatly into any specific genre or medium, of course. Trial and Error: The Aviated Efforts of Jean Baptiste de Bomberaque may not be a comic or a graphic novel by definition, but it is definitely sequential art, and Øivind Hovland should be applauded for making this peculiar little niche entirely his own.

Trial and Error: The Aviated Efforts of Jean Baptiste de Bomberaque is available from www.tabella.com for £11.99.