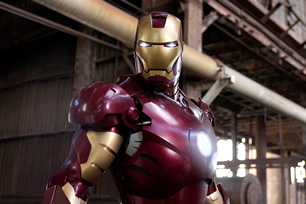 Like an off-course stealth missile, Iron Man hits multiplexes with a fraction of the anticipation that preceded the third instalments of the Spider-Man and X-Men series. Jon Favreau’s fourth directorial effort follows a similar origin story approach to those franchises’ first films, producing possibly the most vibrant, wry and exuberant superhero movie since Donner’s Superman. No superpower prejudice or emo angst here; Tony Stark has a ball with his talent, his wealth and his many women, and we have a ball watching him. Robert Downey Jr.’s turn as Tony Stark is the films consistent trump. Even after Stark has had his “eyes opened” his plight to make good does nothing to calm his narcissistic egotistic tendencies. Possessing a magnetism that shines through even when encased in gold-plated titanium, Downey Jr. gives Stark a credibility that he has often lacked in comic form.

The rest of the cast are equally good, particularly Jeff Bridges, the Dude himself, as Stark’s sinister mentor Obadiah Stane. Gwyneth Paltrow fills a thankless but fundamental role, as the ridiculously monikered love interest Pepper Potts, while Terrence Howard, as Stark’s erstwhile buddy James “Rhodey” Rhodes isn’t given much to do, but is set up nicely for a substantial future. And yes, Samuel L. Jackson does make a post-credits cameo as a certain Ultimate Marvel iteration certain agent of a certain acronymic counterterrorism and intelligence agency.

Jon Favreau may not have the auteur’s touch present in Raimi’s and Nolan’s superhero offerings, but like his previous offerings Elf and Zathura, Iron Man is simply an enjoyable romp. As with the best comic adaptations, Iron Man alludes to potential future events from its vast comic book history (mind you don’t slip on the paradox) including the Mandarin and War Machine. But primarily, the film fully accomplices what it sets out to do, introducing a character that has never blipped the public’s radar to the extent Batman and Spider-man have.

Writhe with caricatured Al-Qaeda goons and celebrity arms dealers, some might find the film’s animated treatment of Stark’s capture by Al-Qaeda inspired terrorists – who in delicious Hollywood irony happen to be using his military hardware – crude to the point of insulting. Unlike the woeful Lord of War, however, this is the simplistic fantasy fluff of comic books, and has no pretensions to anything greater.

Like the first Spider-Man and X-Men before it, Iron Man’s sole fault is that it spends so much time presenting the origin story there is little time to introduce an effective villain. Iron Man has always been a major power in the comics, fighting alongside demi-gods and aliens; on-screen he is presented as nigh-on omnipotent, facing little in the way of threat level that these stand-offs deserve. The eleventh-hour introduction of Iron Monger, a bulkier, inferior war-suit built from Stark’s Mark I armour, feels tacked on to the end, as though the multitude of screenwriters realised the necessity of an antagonist too late in the game.

But a heavy second half does nothing to hinder the first truly decent comic movie since Batman Begins. Iron Man may follow the origins story conventions a little rigidly, but it’s a fine presentation for a surprisingly relevant superhero franchise. Far better than any of 2007’s spandex offerings, Favreau and Downey Jr. have laid the steady foundations for a sequel than can only improve on Iron Man‘s successes and graft over its minor imperfections.

The best superhero movie of 2008? We’ll have to wait for the Dark Knight Returns, Hellboy 2, Watchman and Hancock to say. I’m getting giddy just thinking about it…