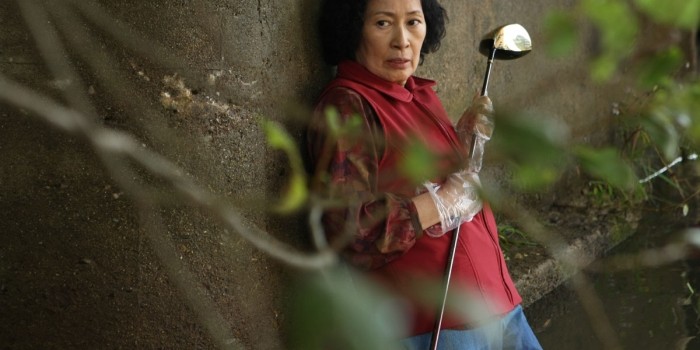 Hell hath no fury like a mother scorned in this peculiar South Korean film from Bong Joon-ho, the director of The Host. While this quiet tale of a woman intent on proving her son’s innocence after he’s convicted of murdering a teenage girl couldn’t be more different in style than Joon-ho’s monster movie, it retains his irregular tone and inappropriate humour that may seem alien to Western audiences.

Joon-ho paints a quaint picture of South Korea; one of peasant villages, inept cops and intimate communities a world away from the sleek architecture of Seoul that we are so accustomed to seeing onscreen. Seventy year old actress Kim Hye-ja justly won Best Actress at the 2010 Asian Film Awards for her portrayal of the incessant Hye-ja, who doesn’t pursue justice the Hollywood way (à la Taken), but through directness and charity. Won Bin is the one weak link here as the idiot son Do-joon, a comical halfwit who at times seems to have wandered in from a Farrelly Brothers movie. Perhaps the film’s biggest shortcoming is that Joon-ho fails to convince us that the world wouldn’t be a better place with Hye-ja’s beloved boy behind bars. Joon-ho throws genre conventions out the window, and several major plot elements are left to interpretation. Where does Hye-ja get her seemingly endless supply of cash from? Elsewhere, a key character’s appearance on the murdered girl’s mobile is never fully explained. Yet while the plot’s idiosyncrasies will probably earn it as many detractors as supporters, the irresolute ending deserves far deeper discussion than Inception’s “is it/isn’t it a dream?” conclusion has garnered.

Hye-ja’s quest to prove her son’s innocence reaches such an unexpected and harrowing conclusion that it’s easy to forgive Mother of its many quirks.

Extras: An insightful 40 minute Making Of documentary, cast and crew reflections, ‘The Transformation of Hye-Ja Kim,’ and a trailer.