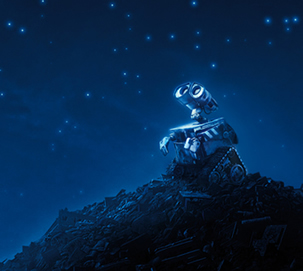 After the delightfully oddball concoction Ratatouille, Pixar has moved further still from family movie conventions with Wall E, the tale of a diminutive recycling robot (a Waste Allocation Load Lifter Earth-Class) continuing to operate on a barren Earth long after mankind has trashed the place and buggered off. When the sleek, iPod-inspired probe EVE hits Earth, our lonely trash compactor’s love for her takes him to the stars and beyond. Given that Pixar created such an empathetic entity as Luxor Jr. from a hopping desk lamp, it should be no surprise that Wall E is capable of displaying more humanity than most live actors. That the stout lovechild of Short Circuit‘s Johnny 5 and a Nintendo Gamecube, with almost no associable human features, is one of the most endearing and sympathetic heroes of the last decade is testament to Pixar’s two principal crafts: the very finest animation, and an earnest, heartfelt approach to storytelling which no amount of Disney/DreamWorks success formulae will ever recreate.

It’s almost a waste of a paragraph to mention Wall E’s animation. Since Toy Story made the jaws of 1995 plummet, computer generated imagery has matured to a level where it has become possible to enjoy these animated features without even considering the level of labour which goes into such a work. Photorealistic at times, Wall E’s uninhabited world is impressively detailed; the mountains of junk that now tower over our dilapidated cities never seem to repeat, nor do the household items our inquisitive robot explores. Many of Pixar’s other efforts also make wry cameos, often as plastic Happy Meal toys.

For any other studio, such affectionate touches would warm our hearts and tickle our intellects, but this attention to detail has almost become a prerequisite of Pixar. Sadly, like Cars, Wall E does not quite reach the colossal expectation that greets all of the studio’s films, due in most part to the second half’s somewhat sentimental human sequences. Bloated, slothful and technologically dependent to the point that our bone masses have decreased, our species is in a sorrowful state. Despite helmer Andrew Stanton’s initially cynical tone, one which sees Mother Nature as a now precious commodity, the film eventually takes a more forgiving approach, treating those who destroyed our Earth with maternal fondness rather than contempt.

But though this tactless sentimentality jars with any anti-consumerist message that Stanton was presumably headed towards at some point – I will conveniently ignore the fact that Wall E has already spawned millions of merchandising products, many of which will end up as landfill – we must bear in mind that this is a kid’s film. A superlatively glum and sceptical kid’s film with a bright and happy ending, then.

As much of an achievement as Wall E is, it’s difficult to believe that even the most apathetic of cinemagoers will leave their seats without some small feeling that it could have been something great. Is it fair to criticise an excellent film for not being great? Probably not. But again, only Pixar would be scorned for a tailoring a family film for the littl’uns by sprinkling in two ingredient often missing from postmodern cinema; hope and forgiveness. We’re ungrateful bastards.