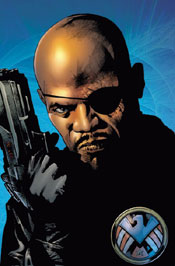 When Marvel announced its plans for the Avengers movie tie-in event, comic book fanboys, pseudo cinephiles, unemployed journalists and their grandmothers all simultaneously entered a stage of zealous crystal ball polishing. Will the Hulk be a member? How will they integrate Thor? Surely Robert Downey Junior will be back? And so on…

Well, it seems the first nail is in the coffin of this most ambitious of superhero cinema projects, as Samuel L. Jackson has announced to the Los Angeles Times that he is unlikely to participate in The Avengers, or indeed Iron Man 2 or The First Avenger: Captain America, due to what he calls “an economic crisis in the Marvel Comics world.” More pay, then. Or maybe he’s only recently sat down and watched his own performance in the The Spirit, and has decided to give the superhero stuff a rest.

Though Jackson’s exclusion will be a shame, it shouldn’t prove too big a problem. After all, comic readers are used to artists illustrating each character in a distinctive way, and most attention deficit cinemagoers probably didn’t wait through the end credits anyway. The big question is whether Marvel will decide to go with the Ultimate Nick Fury, which was based specifically on Jackson, or the classic Nick Fury, previously portrayed by, um, David Hasselhoff.