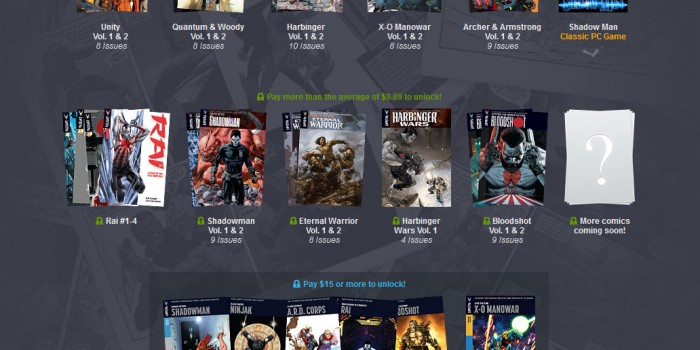 This is a few days old, sure, but for those who don’t yet know, the Humble Bundle’s latest book-related offering is a rather fine selection of Valiant titles. While previous comic book bundles have presented a variety of popular, old and niche titles, this pack basically provides the perfect gateway into Valiant’s successful reboot, containing digital copies of the first 8-10 issues of each of the publisher’s flagship titles, including the critically acclaimed Archer & Armstrong, Quantum & Woody and Harbinger.

For $15 or a value of your own choosing, you can immerse yourself in some of the finest superheroes titles currently being published. A percentage of your payment can go to Doctors Without Borders, the Hero Initiative and/or the Comic Book Legal Defense Fund, so you also get the satisfaction of knowing that you’ve contributed to the world.

Also included as part of the bundle is the PC game adaptation of Shadowman, which I have extremely fond memories of… though I suspect it hasn’t dated particularly well.

Check out the Humble Valiant Bundle at: www.humblebundle.com/books.