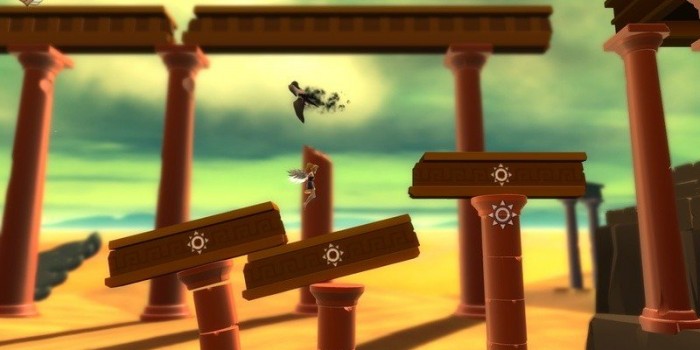 What is it about certain title screens that reassure you of a game’s quality before you’ve even pressed Start (or the equivalent)? As soon as NyxQuest: Kindred Spirits loads up, we are greeted by a majestic image of winged avatar Nyx atop ancient ruins, silhouetted against a scarlet sky while a haunting score echoes in the background. If there’s one thing the Wii is short of, it’s “classy” games; beautiful and finely crafted experiences that are as much about the art of videogame design as anything else. Seemingly coming out of nowhere, Spanish developer Over the Top Games’ first effort joins this venerated minority, sitting comfortably beside Okami and Lost Winds as the sort of hidden gems that slowly become the initiated gamer’s smug little secret

Much like the comparable Lost Winds, NyxQuest: Kindred Spirits plays on a two-dimensional plane, allowing for some sophisticated use of the 3D engine’s backdrops, and the game also offers one of the most creative uses of the wiimote so far. While the Wii’s motion-controls have frequently been used to resemble a virtual tennis racket, golf club or sword, act as a light gun or enable a vicious flurry attack, NyxQuest actually bestows you the Hand of God. Several gods, in fact; big Grecian folk with wispy beards and a penchant for meddling in the affairs of their favourite mortals. The plot takes numerous liberties with the myth of Icarus: instead of plummeting into the sea after the wax wings created by his father Daedalus melted, Icarus flies to a heavenly realm in the sky. Here he meets and falls in love with the winged girl Nyx. When Icarus disappears one day, Nyx descends to the mortal realm to search for him, and is shocked to find that Earth is a barren landscape comprised of scorching sands and desolate ruins, with ravenous harpies and charging satyrs the only signs of life. Fortunately, Nyx’s search soon has the blessing of Zeus himself, and though he and his fellow deities are unable to directly intervene, they may occasionally assist.

And that’s here you – yes, you! – come into play. With the Wii Remote-directed reticule, players can move solid objects, harness the power of fire, change the direction of the wind and strike enemies down with lightening bolts… all while navigating Nyx with the Nunchuck’s analogue stick. These simultaneous duties are initially fairly testing, but the game gradually eases you into its mechanics. Once you get used to handling both Nyx and her divine aid at once, NyxQuest becomes regularly challenging but never impossible. Nyx herself is a nimble creature who cannot attack but has the ability to glide and flap her wings up to five times for additional air; despite the level of multitasking that later stages demand of you, the controls are so finely tuned that you have only yourself to blame if you fail.

Sound a little tricky? It is, and naturally there are those who might struggle with this ambidextrous scheme – at first I often killed Nyx by accidentally dropping a large rock on her head. To remedy this, a second player may join in and assume the manipulative powers of Zeus and associates, while the other concentrates on Nyx. This co-operative mode doesn’t change the game in any way, but it’s nevertheless a nice addition which makes NyxQuest accessible to all, and not just the sort of ardent gamer who previously spent endless nights mastering Schizoid on the 360’s Live Arcade. Checkpoints are also strategically placed; close enough to stop the game from frustrating, but far enough to present a challenge. I’ve somehow managed to get this far into the review without mentioning NyxQuest’s stellar graphics. The striking visuals and excellent sense of ambience really set this game apart from anything else on WiiWare… and arguably the Wii in general. Though the entire game is set amongst a wasteland of shattered structures, there’s a good amount of variety. Many levels have a central theme, such as a purple-tinted stage where a deadly black fog constantly restricts Nyx’s flight, or another where she must hide from the distant Eye of Argos, which summons an obliterating sand storm should it spot her.

NyxQuest’s 12 levels shouldn’t take you more than 3-4 hours, though there are also famous treasures to be located, including the Golden Fleece and Lyre of Apollo. Finding all twenty unlocks the exceptionally hard thirteenth level, Arcadia. It seems petty to criticise a downloadable game such as this for its length, but clocking in at just over three hours, NyxQuest ultimately feels like a teaser for a forthcoming project rather than a complete game. There are only three varieties of enemies (harpies, satyrs, and the Hydra, who occasionally rears its ugly heads through the burning sands) and while Nyx’s gifts from the gods are all well implemented, she herself remains unchanged throughout. But in many ways these criticisms could be interpreted as a compliment, and testament to the excellent gameplay mechanics that Over the Top Games have forged with their debut. I would happily pay full retail price for a more elaborate sequel.

If your Wii is gathering dust, yearning for some decent software, check out NyxQuest: Kindred Spirits at a reasonable 1000 points. Shining like a diamond amongst the proverbial pile formed from dated console ports and mindless shovelware, it’s the kind of inventive but accessible third-party title that the Wii desperately needs right now.