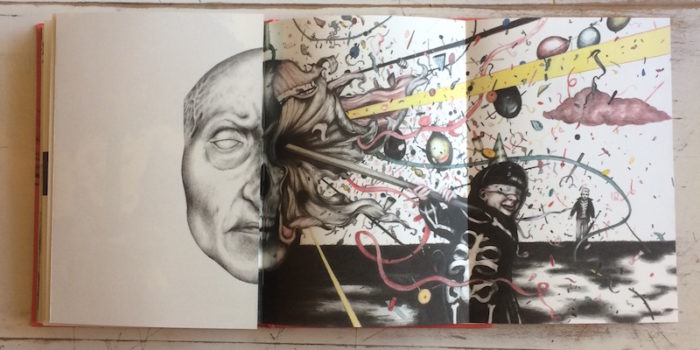 As I’ve mentioned in previous posts/reviews, possibly a few times too many, we’re seeing a wonderful move towards physical books being published as artefacts rather than merely texts. As more of the comics and novels I read each year are consumed in digital format, such aesthetically pleasing and purposely tactile books as Tim Lane’s Silent Quarter have filled the same space in my heart as vinyl does for music aficionados trapped in a world resigned to streaming. From the elegant foil-embossed hardback cover to Lane’s incredible foldout art, this illustrated short story relishes its place on your shelf as a luxury item, a book for book lovers. Its title apparently the result of a misheard Talking Heads lyric, Silent Quarter tells of an old man who is a barber by trade, but by night crafts ceremonial masks for the locals of a city suburb mysteriously surrounded by dense woodland. To further detail Tim Lane’s abstract plot, or its ethereal landscape, would be to do it a disservice. Through the elderly mask maker, Lane’s existential vignettes deliver a melancholy reflection on man’s dichotic nature, on the relationships between reality and memory, community and creativity, mortality and ritualism, mourning and celebration. Lane’s first foray into publishing was the inventive Anima Mundi, essentially a 5 meter long image that folded into an A5 hardback, with the neat concept being that the “reader” could manipulate the book’s visual narrative by folding the image at different stages. A more manageable form of that concept has made the transition to Silent Quarter, with the book’s mesmerising foldout graphite illustrations. Much like the old man’s masks, these images reveal new meanings and significance to the narrative when unfurled.

The written and illustrated components of Silent Quarter have a symbiotic relationship so rarely seen in illustrated prose. Lane’s story is elegantly written and always engaging, reminiscent at times of Paul Auster, yet its ambiguity might have left me feeling unsatisfied were it not for his art, which compelled me to return to it upon completion in search of hidden meanings. Likewise, the artwork, while undeniably brilliant, only truly comes to life when juxtaposed with the fragmented prose. Lane’s surreal illustrations wisely leave much of the mask maker’s surrounding to the readers’ imagination, instead offering a glimpse into his psyche. Silent Quarter was self-published via the Bristol-based Antlers Gallery and funded through kickstarter. It’s currently only available online via the Antlers shop, as is Lane’s previous book, Anima Mundi. Given this limited availability, Silent Quarter probably won’t sell large numbers, but it’s the perfect justification for self-publishing; a unique and heartfelt work that exists purely because some talented creative soul felt it needed to be made. I wouldn’t want to live in a world without such beautiful things.