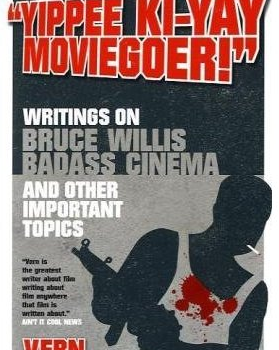 Vern is a one of a kind film critic you’ll either love or hate. The title of his previous volume, Seagology: A Study of the Ass-kicking Films of Steven Seagal, should give you a good enough idea of what to expect with Yippee Ki-Yay Moviegoer. Characterised by a writing voice that reads like the transcript from an episode of Mystery Science Theatre 3000, Aint it Cool News regular Vern is a critic defined by his love of trashy action movies, and one who isn’t afraid to mock all that he holds dear. The truest sign of a good film critic is that even when you disagree with their critique, their contrary opinions should still prove enlightening and/or entertaining. And this collection of Vern’s articles demonstrates this in spades. From his pondering the reproduction systems of the characters in Pixar’s Cars to comparing Mary Poppins to Batman, Vern is always engaging, not least because despite his passion for so-bad-it’s-good cinema he enters all films with an open mind.

Vern’s observations are also surprisingly sharp. In some ways he’s the American film criticism equivalent of Karl Pilkington; either he’s a smart guy impersonating a junk culture moron or a bona fide idiot who’s a lot smarter than he appears. His review for X-Men 2, written as a letter to Mystique, suggests the former, and is perhaps the best example of this mock idiocy, beginning as an incoherent rant from a reality-confused fan only to lead into a commentary on Guantanamo Bay and the Patriot Act.

While a good half of the pieces in Yippee Ki-Yay Moviegoer are focused on action movies, there are plenty of more oblique choices that define Vern’s broad tastes, yet all expressed via his trademark rants that are frequently laugh out loud funny. Anyone who describes Alejandro Jodorowsky’s The Holy Mountain as “the Die Hard of surrealist alchemy comedies” deserves a place on any film student or aspiring writer’s bookshelf.

So yeah, grab this book and stick on your shelf next to those precious Roger Ebert volumes. If nothing else, it’ll make a statement; even if that statement is a middle finger. Vern’s too unique to gather anything more than a niche audience, but I’m sure that’s exactly how he wants it.

And finally, I’d like to take a moment to personally thank Vern for pointing out the fact that the title Action Jackson doesn’t actually rhyme. To think, all these years I’ve been living a lie…