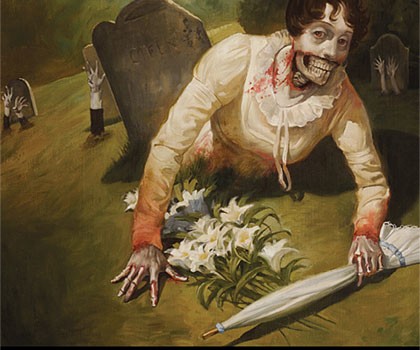 Go on, admit it. When you first heard the title Pride and Prejudice and Zombies, a small part of you was intrigued. You may have rolled your eyes in disgust, or proclaimed the decline of modern literature, but inside you were sniggering. Pride and Prejudice and Zombies: The Graphic Novel

I’m in an awkward position to be reviewing this book, as I have read neither Seth Graham-Smith’s novel nor indeed Jane Austen’s perennial favourite. The closest I’ve got to the original source material was a TV adaptation, but I’d still like to believe I could get in on the joke, so to speak, and appreciate where and how Graham-Smith inserted the undead into Austen’s text.

Tony Lee does not have it easy in adapting Graham-Smith’s literary perversion, in that part of the fun in Pride and Prejudice and Zombies is, so I’m told, that it begins much like Austen’s original, with the “unmentionables” (as the zombies are usually referred to) slowly munching their way into the original text and sending it in new directions.

This is, of course, impossible to translate into the comic format. In an odd way, Pride and Prejudice and Zombies: The Graphic Novel reminds me of Stanley Kubrick’s Lolita. Kubrick presumably understood the book and what made it work, yet by adapting the novel into film he was always going to have to excise the dense reflective narrative that defined Nabokov’s opus. Likewise, comic stalwart Tony Lee does as good a job as is possible here, but there’s definitely a sense that something has been lost in translation.

It doesn’t help that the zombie infested Hampshire inhabited by Elizabeth Bennet and Mr Darcy isn’t in any way credible. The problem isn’t, as you might instantly assume, with the walking corpses littering the English landscape, but the martial arts training that the Bennet sisters are devoted to. Oddly, the zombies fit quite suitably into Austen’s quaint little world; it’s the samurai swords and ninjitsu elements that feel entirely incongruous to the characters and their prim society.

Cliff Richards, whose work on Buffy the Vampire Slayer managed to capture the TV source material perfectly, takes an unusual approach with this book. His illustrations are essentially abandoned at the pencilling stage, with several prominent elements or characters in each panel highlighted by thick outlines. The result takes some getting used to, and while the action scenes occasionally become confusing because of a lack of clarity, this stylistic choice does suit the book. Richard’s knack for illustrating compellingly luscious women still shines throughout.

It perhaps goes without saying that Pride and Prejudice and Zombies: The Graphic Novel is a one note joke, though I must confess that the book left me feeling confused, alienated even. But I suspect that most of my issues with the story were with Seth Grahame-Smith’s novel rather than this graphic novel. Tony Lee and Cliff Richards have delivered a finely-crafted adaptation, but it’s one that those familiar with both source novels are likely to appreciate most.