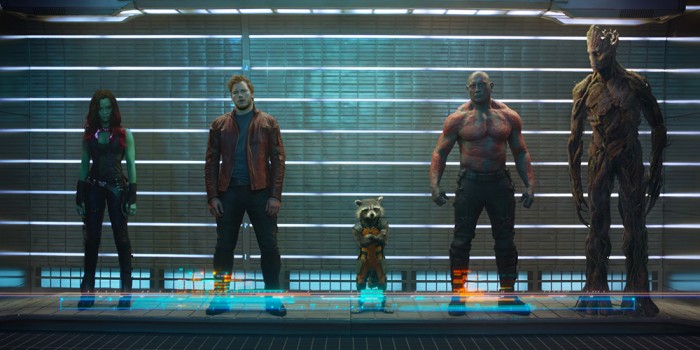 Who uses Blue Swede as a trailer song when they’re not Quentin Tarantino? Can you guys think of a time when a superhero was called an A-hole?

These very important questions were the first thing that ran through my mind when I saw the first trailer for Marvel Studio’s Guardians Of The Galaxy. As a comic book outsider, I’d never heard of these cats till Marvel announced them as one of the Stage 2 titles. I’d even heard of Animal-Vegetable-Mineral Man before these guys.

A colleague of mine (friend’s a strong word), instantly dismissed them because of the talking raccoon, which straight away made me want to prove him wrong. This being the guy who prefers Dark Knight Strikes Again to Dark Knight Returns… When I saw the latest trailer, which shows a squad of sassy, fucked up individuals, I had to learn a bit more about them because it had me hooked. It looked like Star Wars with balls and cooler furry animals. I instantly ordered Brian Michael Bendis’ Cosmic Avengers run, which I was advised by Amazon was a good starting point to the Guardians. After reading it, I reckon we could be looking at the world’s new favourite super hero team. Yeah, you heard me JLA!

For ignorants like myself: the Guardians are five questionable characters banded under a self-important and overblown title, the Guardians of the Galaxy. You have Peter Quill, or Star Lord, the leader of the group; Gamora, daughter of Thanos; Drax the Destroyer; Groot, who is a tree, and Rocket Raccoon who is a one-of-a-kind genetic construction and a bit like a furry Deadpool. It becomes evident early on, and even described as such by Peter Quill’s father, that these are broken people. The Guardians are ramshackle and disillusioned with nothing left to lose, but are clearly the underdogs to be reckoned with and fight the good fight. The volume begins with the back story of Peter Quill, and straight away cleared up a lot of questions the film trailer threw up, i.e. why is an apparent alien called Peter? It turns out he isn’t an alien; apparently the dude is next in line to the Spartax throne and his father is a bit of a douche. The volume then goes all Blues Brothers in getting the band back together and reuniting the Guardians, who all seem to be off perusing their own agendas in the big ol’ cosmos.

Peter wants to bring the gang back to stop his father’s latest law on banning landings on Earth, which Peter is worried will turn it into a target for the whole galaxy. This is all part of a larger plan against the planet and a way of isolating the Guardians. Plus, Iron Man turns up in a Bob Hope-style Scooby Doo cameo. “Hey look gang, it’s Bob Hope!”

As usual, I won’t cover any further details of the story because I’m lazy and it will be quicker for you to read it. However, I can convey that I did enjoy this volume. The Guardians offer to comic book fans the anti-Avengers. They have all the no compromise vigilante attitude and individuality that Batman has, and, to be fair, most of the group have similar backgrounds. They are victims of loss, sadness and loneliness who are bonded together through this, but unlike Batman, there’s none of this ‘I work alone’, and this need for unity makes them very likeable. You really care about them as they care for each other, but God help you if you meet them on the battlefield.

In a way, the lack of ego and the thirst for raw justice makes them more interesting than the Avengers, as they answer to no-one and throw a ‘fuck you’ to the authorities. With Star Wars coming out soon, Disney may have inadvertently set the standard too early with Guardians, because even though I’m a bigger Star Wars fan, I’m far, far more excited about the Guardians when it comes to galactic operas.

In terms of mainstream superhero entertainment and flawed heroes, Marvel tends to do it better than DC, whose flawed characters are generally more messed up in a dark, brooding way. Even the funnier DC characters like Ollie Queen wouldn’t shout ‘Blam, murdered you,’ like Rocket would. Marvel takes these amazing characters and brings them right down to our level. Nobody’s perfect, right? Even though Marvel Studios hasn’t got Fantastic Four or X-men and are resorting to second tier heroes like the Guardians, DC must be worried – because after JLA, where do they go for the light relief, wide appeal stuff? Batman vs. Superman won’t sustain a cinematic universe forever.