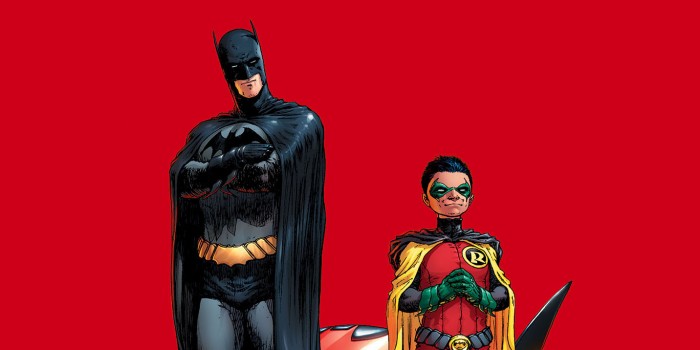 Morrison really does have a pair of balls. He annoys people more than the god damn Frank Miller and divides opinion over everything he does, whether it be his run with the JLA or with New X-men. But really, he’s a cat who truly is worldly wise. There’s nothing more funny than watching a fat, acne-ridden geek get upset about Morrison’s take on a classic character, getting all puffy and panting… makes me smile! Grant Morrison truly knows Batman, and I’ve listened to interviews with him where he charts the evolution of Bruce Wayne. He doesn’t see the early days, where Batman has odd gloves and a gun, and the present, brooding Dark Detective as separate things. He sees them as simply different points in Batman’s life; he was this guy and has now grown up to become the same guy.

This, then, gives Morrison a real treasure trove of material to drawn from. One point in particular had me gob-smacked and gushing, but more of that breakdown later. I must admit though, I’m as guilty as the next comic book fan of indulging in the cosy joy of routine. But Morrison nails it because he sees that there is no real need for radical change, taking the time to really flesh out these great characters and back-stories, and keeping the original concepts but twisting them slightly for a more adult/modern audience. He’s not like Miller, who will reference the past with snide contempt; Morrison tries to legitimise things like the International Club of Heroes or the most dorky of characters. As with most of Morrison’s work, the story is pulling this way and that, with sassy writing like peer Mark Millar, combined with odd nods to the fans. The story dovetails off the Mark W.Barr Son Of The Demon run way back in the 80s (the one where Batman fucks with his cowl firmly on). In Morrison’s Batman run, Batman has a son by Talia Al Ghul called Damien, who is basically a psycho, a bit like Karl in the Walking Dead comics. He is thrust upon Batman, as the boy needs the ‘guidance of a great man’ and lacks discipline. He is effectively like Scrappy Doo for the first part of the run, acting very cocksure (and indeed like a cock), dispatching Tim Drake to become the next Robin and locking Alfred in a cupboard. He just wants to fight everyone.

The second half of the book turns into a murder mystery with the introduction of the Black Glove and the Batmen Of All Nations. Both stories are underlined with the 3 Ghosts of Batman, who are programmed GCPD officers conceived to replace the Bat should he be killed. The experiment went wrong and now they have gone rogue with the goal of killing the Dark Detective themselves.

This is all by-the-by. There is one single concept that has my interest in this book and I alluded to it before: Grant Morrison reintroduced Bat-Mite into this very serious and adult Batman story, and boy did he handle him well. Bat-Mite is such a goofy character, he’s to Batman what Mr Mxyzptlk is to the Man of Steel, an all-powerful imp who won’t leave his hero alone. What Morrison did with him is create him as part of Bruce’s psyche, and his appearance follows no linear pattern and is so sporadic and random.

Morrison’s crowning glory, though, is Bat-Mite’s introduction to the reader, a single page splash, painted so well with such a cool line… ‘now you’re in trouble Bruce.’ He then proceeds to act as Bruce’s guide through his memories, quipping and helping maybe every 10 pages, trying to get Bruce to think his way out of a difficult situation. It was a really bold move to bring Bat-Mite in but hallelujah it paid off and I’m looking forward to seeing more of him in the next volume, Batman R.I.P. The final gutsy part of Batman And Son is that one whole issue is written in prose, which really flies in the face of comic books as it is now no longer a comic book. The issue is about the Joker’s rehabilitation following his being shot in the face, and it really is in the same vein as Morrison’s earlier work, Arkham Asylum. The lack of visuals makes the need of the descriptive writing to be more ramped up and graphic. It’s probably the most graphic part of the book, where Morrison’s words are painting whole comic panels describing serious mental disturbances and violence.

It makes me laugh, along with looking at the wheezy fat nerds, the antagonism Grant Morrison gets when he brings artistic credibility to a cultural form that struggles to get any form of credit. When I got into these funny books 2 years ago, as an outsider reading the reviews of his work, you’d think he was single-handedly breaking down the heritage of comics. But personally I think that he’s bringing an intelligence and historical knowledge to the title that really is lacking in the industry. If you want an example of how this is done wrong, look at Bryan Singers X-men films…

One thought on “Batman And Who?!”