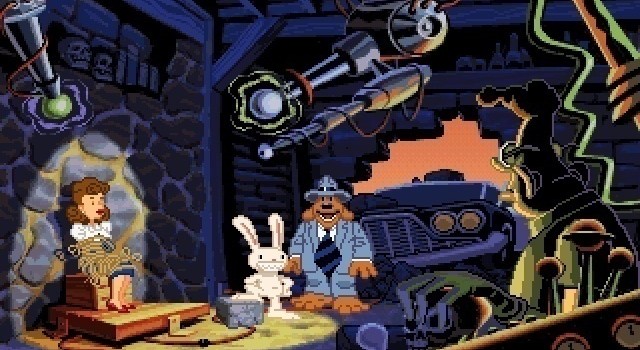 So… LucasArts is dead. Culled by Disney in an effort to “minimiz[e] the company’s risk while achieving a broader portfolio of quality Star Wars games.”

In the past day we’ve had eulogies from Ron Gilbert, Tim Shaefer and all manner of Tweets lamenting the loss of a developer that, for gamers of a certain age, is synonymous with quality video game tie-ins and the funniest, most inventive adventure games the industry has ever seen. However, emphasis should be placed on gamers of a certain age. For if you asked a younger gamer, one whose perspective is not blurred by irrational nostalgia, they’d probably struggle to find a reason to care. A teenager exposed to little beyond the current generation of consoles might question why anyone would care about the closure of a company that recently either developed or produced such games as the lacklustre Kinect Star Wars, the doomed Old Republic, pointless sequel The Force Unleashed II, and the forgotten Indiana Jones and the Staff of Kings…

The last entirely original game actually developed by LucasArts was 2009’s 2D side-scrolling puzzler Lucidity, a modest downloadable title that received a mixed reception on release, but had a unique art style and engaging atmosphere. That same year also saw the release of Tales of Monkey Island, a wonderful episodic revival of the beloved LucasArts point ‘n click series, ironically developed by Telltale Games; a developer that notably includes former LucasArts talent. And, more notably, a developer that has gone from strength to strength with sequels to abandoned LucasArts’ franchises Sam & Max and Monkey Island, and seminal adaptation The Walking Dead. The last non-Lego Star Wars title (though it has to be said that Traveller’s Tales did a fine job with those) to have built up any level of hype was 2008’s The Force Unleashed, which, despite some iffy controls and an over-reliance on QTEs, was an inspired take on Lucas’s galaxy far, far away, and grabbed piqued imagination in a way that no Star Wars title has managed to do since. And the general consensus from fans was that it sucked. Yes, the next-gen Star Wars title 1313 looked impressive, and may well have delivered on the potential shown in its revealed footage, but would the franchise’s disillusioned followers give it any warmer a reception than they did The Force Unleashed?

But perhaps to criticise the developer for recent failings is to miss the forest for the trees. The end of LucasArts is a loss to the gaming world, not because many talented people have lost their jobs – and I sincerely hope they all find homes elsewhere – but because of what the studio could have been given the right direction. Mourn for what could have been, then, I say. Revisit those classics, and appreciate the fact that the studio was never going to bring us another Grim Fandango, no matter how talented the writers, artists and programmers working within it might have been. Point ‘n’ click gaming is currently enjoying a renaissance. Dave Grossman’s involvement at Telltale Games, Tim Shaefer’s Double Fine studio and Ron Gilbert’s recent effort The Cave are all doing a fine job in keeping the LucasArts spirit alive, even if the original host has been long dead.

Oh, and for those who don’t quite “get” what the fuss is about, this intro to beloved 1993 gem Day of the Tentacle should help clarify things. 20 years later, and few adventure games have come close to matching its wit, charm or inventiveness.