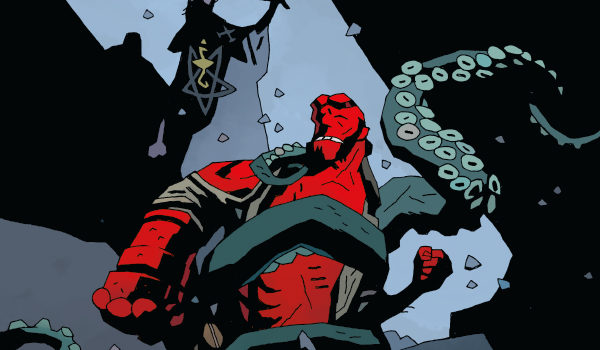 It’s become increasingly apparent that people view Shelf Abuse as a site rather than the blog that it actually is. This may be due to the fact that I rarely write about myself. And why would I when there are comics to read and review?

So, welcome to On the Shelf, a new short and sweet weekly column I’ve wanted to start for some time, in which I chat about the amazing things I’ve been doing, creating, reading and watching. Okay, none of them are genuinely amazing, but let’s just pretend they are; without half-hearted hyperbole the internet would probably collapse into itself. I’ve been enjoying the heck out of Dark Horse’s first Hellboy Omnibus, the first in a series of chronologically arranged collections of Mike Mignola’s finest paranormal detective. My reading list is dominated by indie titles these days, and it’s nice to take in a bit of comic book history. At a reasonable price too, for those who can’t afford the deluxe Library Edition. Since Hellboy debuted in 1993, Mignola’s distinct art has been often imitated but rarely bettered, and it’s inspiring how sure of itself the would-be franchise was from the very first page. Speaking of art, if not great art, this week I caved in and bought a Wacom Intuos Pro Medium, to compliment my Surface Pro as a digital drawing toolset. I never quite got on with the Cintiq, and the moment I transitioned to the Surface Pro the ability to dance between of pen and touch commands was nothing short of revelatory. The Intuos Pro is pretty amazing too, and makes up for its lack of screen (I plan to paint and colour with it, if not draw or ink) with an intuitive selection of shortkeys and the ‘Touch Ring’, which is far more useful than I could have imagined. Hopefully one day soon I’ll find the time to use all this overpriced gadgetry to work on something more engaging than marketing imagery. While I dream of pursuing those personal projects, the media is busy sticking the knife into Disney mammoth Solo: A Star Wars Story with considerable glee. I went into the cinema with low expectations but thoroughly enjoyed the movie. It felt like a nineties Expanded Universe book or comic, and probably captured the franchise’s serial fiction roots better than any entry since Return of the Jedi. Social media seems to be divided between those who hate it on principle and those who were also surprised by how much they enjoyed it, which I guess is at the core of Solo‘s box office dilemma. Star Wars is a franchise created by talented and passionate artists under corporate thumb, one that’s trying to appeal to two disparate demographics: older fans who hate anything post-Jedi and the less discriminate who will still buy anything with the familiar icons and logo plastered over it.