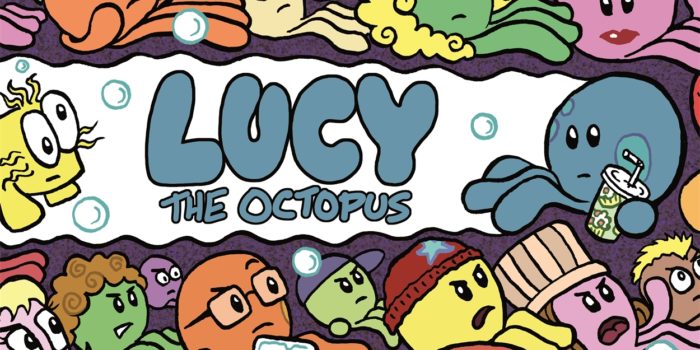 For a guitar-playing octopus, Lucy is inexplicably unpopular. Her classmates all hate her, her siblings bully her in equal measure, even her parents would rather she relocated to another ocean. Only Lucy’s pet pufferfish, a poisonous and potentially lethal present from her parents, is remotely loyal to her, and even that prefers the company of its fellow pets the moment her back is turned. The joke at the core behind Richy K Chandler’s charming all-ages series, of course, is that, much like Daria Morgendorffer and Scooby Do‘s Velma before her, Lucy is pretty damn cool. She’s smart, compassionate and, courtesy of a watermelon-over-the-head disguise, the enigmatic new guitarist for Lamington Fuzz; a rock band that seems to be incredibly popular yet play solely within the confines of Lucy’s hometown, Stoneydip. I’ll confess that I’ve always struggled with how these Finding Nemo-esque aquatic worlds work…

As with Chandler’s earlier work, When Are You Going to Get a Proper Job?: Parenting and the Creative Muse, this is very much a book forged around a positive message. Lucy the Octopus has been described by Chandler as an “anti-bullying comic”, with the titular heroine providing an ever-optimistic role model who, rather importantly, never resents the classmates who sling increasingly awful verbal abuse her way, instead focussing on her personal dreams with an infectious buoyancy. This hardback volume collects the entire webcomic, which I believe ended last year. Such collections of three or four -panel strips can prove a laborious read. Sometimes the strips work in sequence as thought they were always intended to be, telling longer narratives in bite-sized chunks, while at other times reading a weekly strip in collected form evokes Groundhog Day, with the same themes and jokes reiterated ad nauseam. Lucy the Octopus does occasionally veers towards the latter, especially during the first third of the collection, with too many strips repeating the same beats.

However, as Lucy finds herself, forges friendships and Chandler uses the strips to experiment with his peculiar creations the book becomes a joy. In my favourite sequence, Lucy imagines reinventing herself through the lens of several different genres, with the art changing to incorporate different mediums, and panels inspired by the work of Alfons Mucha, 8-bit gaming and even claymation. Sweet-natured yet frequently surprising, Lucy the Octopus is ultimately everything an all-ages title should be, and younger readers might just find their fictional hero in Chandler’s optimistic invertebrate.