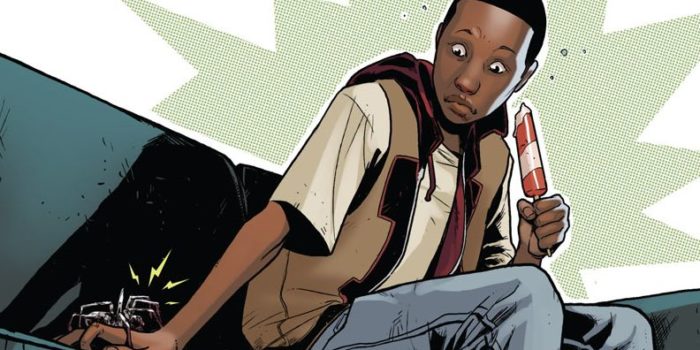 When I began On The Shelf a few months back I vowed to write an update every week, without fail, and… so… but… well… this happened. There’s more to come. Much, much more.

Please excuse the BraveStarr bag. I didn’t know any better back then.

Next week my mother will finally move out of what was once my home, a building that’s regretfully acted as a storage unit for my comics and old toys (sorry, memorabilia) for a few years too many. My current flat is now swamped with dozens of comic long boxes and bags of comic-related toys and other crap.

Other than consuming my week (and probably next week too) and pushing my poor girlfriend to the brink of a nervous breakdown, collecting all my old stuff has made me reflect on how my attitude to comics has changed over the years. You see, I used to collect comics. Over half the comics I bought I never even read, and I continued to buy them because the act of purchasing something frivolous made me happy for all of five minutes. It took a near-miss with homelessness to update my priorities, and nowadays I tend to buy only trades and one-off graphic novels. Almost all of these I read.

I’d like to think that it’s not just me that’s changed, but many comic readers, and even the industry. Collecting thousands of pamphlets that will one day be worth a quarter of what you originally paid will never prove half as rewarding as just sitting down and losing yourself to a good comic, preferably told with sincerity and owned by its creator, and I think the comic stalwarts of my generation are beginning to realise this. I’m now rifling through these boxes to find the first appearances of Miles Morales for my cousin’s six year-old boy, Eli. He’s been bitten by the Spider-man bug, but his dad is struggling to find much Morales stuff for him. Giving away my comics would have once reduced me to tears, but not any more. Comics deserve to be handed down to the next generation of fans, not hoarded like precious artefacts; barring the few genuine antiques, of course.