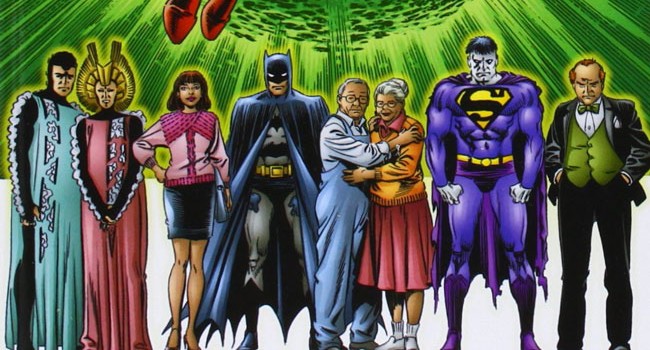 or: I Spent The Night With Superman And It Ruined My Life

There is a review in here somewhere, and I’m sure John Byrne will get his due, but I have to take some time to talk about Superman and how much he’s really been messing with my life for the last 2 years.

When I grew up I couldn’t give a shit about Superman, I was a Batman guy, loving the 1989 Tim Burton film and the Bruce Timm animated stuff. Superman though, I found a bit preachy and this element of religion is so prominent in Kal-El. I love the Kevin Smith attitude to Superman; how can you write a story about a superhero Jesus, a man with no weaknesses, until you get out the fucking rock? It must be so hard to write for him in any media, because more than most heroes you can tell he’s going to win, kryptonite or not.

Then I got older, and in university I got to appreciate the first two Richard Donner films. Then Superman Returns came out, of which I can only watch the opening credits (they are the best Superman opening credits ever) because it’s so boring and not very Superman… he just stalks a women again and again, then plays Jesus at the end. Then Man of Steel came around and suddenly I realise that, unbeknownst to me, my religious beliefs and Superman have been fighting over my soul for years, like the Red and Blue Superman of the 60s. I was raised Catholic, and as you get older it gets really hard to rally round to a religion that has caused so much tragedy and suffering over two thousand years – the effects of which can still be seen today.

Now, Superman is not my religion, that’s just crazy talk, like those losers that say on censors that they’re ‘Jedi’, but I appreciate the good characteristics he represents. Kinda like Jesus… but Superman hasn’t spurred any real world genocide or wars, so he’s okay.

In the two months before Man of Steel came out, I realised how prevalent this good feeling towards the character was, and I have never been more excited for a film coming out, ever, no exaggeration. I reckon the excitement I was feeling was on the same level as that which swept the Midwestern USA when The Passion of The Christ, the greatest snuff film ever, came out and it ruined one of my holidays.

I went to Amsterdam with my partner of the time, and got so worked up about the flight that I had to drink myself up a storm to get on the plane. I was worried I was going to die and miss Man of Steel. When we landed, my nerves were not alleviated and throughout the few days I was there, it hung over me like the Black Racer, because I knew the danger wasn’t over. Nothing Amsterdam had to offer could remedy this encroaching fear. It got so bad that on the way back, that my ex had to reassure me that it anything went wrong, Superman would be there to save me. The best part of the holiday was landing at Birmingham International Airport… and the relationship didn’t last much longer after that.

I really loved Man of Steel, and all I’m going to say about it before I actually do what I’m meant to and finally review a comic, is on the scenes of destruction at the end with Zod. Maybe, just maybe it’s all part of a big character arc, like what the Marvel Cinematic Universe is doing, so lets stop whining about it and make our judgements after we’ve  seen the bigger picture.

Right, onto the Man of Steel of the 80s!

I brought the first volume John Byrne  trade because I’d heard how much David S.Goyer borrowed from it. I must admit, the first thing that hit me was that it was the only Superman book I’d read that gave a proper and believable description of Kryptonite and why it fucks people up. That was a proper Kaiser Soze moment, because for years DC have been pulling the wool over my eyes and keeping me from the truth .Pricks.

It really does zip along nicely, but crams a lot in. In the first 6 volumes we cover: the fall of Krypton, growing up in Smallville, and meeting Batman, Lex and Bizarro. It’s such a great book, and it’s like an exchange point for Superman. What Byrne borrows from the Dick Donner stuff, he gives back to Superman Returns and Man of Steel. It does make the book feel like a mash up of Superman’s greatest hits. The origin story is Man of Steel, followed by Superman: The Movie in Smallville, then there’s an incident with a space shuttle and Lois, which is the creepy Superman Returns. All drawn in a very Curt Swan, winking, spit curl way, written partly from the sweeping nostalgia that leaps tall buildings in a single bound but hinting at a more serious side of the character. For example, Clark brooding in the dark, dealing with the issue that he cannot live his life just as Clark Kent, because otherwise, as he says, “they all want a piece of me pa.” The volume does have a timeless quality; though it’s an 80s code-approved comic, and aimed at kids so it hardly has the edginess of a Vertigo title such as Alan Moores’ Swamp Thing. It does have that one bug bear of the Superman origin story: Ma Kent sewing his suit. Like, that will last 10 minutes when Metallo is raking at his chest.

I also like how straight off the bat, Lex is like “Fuck you, we’ll always be enemies,” literally after knowing him for 5 minutes. It’s a real tribute to Byrne that although code bound, his ideas and sense of adventure hold up and it’s not childish or a struggle to read, as some stuff from the time can be when compared to the New 52 stuff. Could you imagine the New 52 Joker in the 80s Superman world? They’d think the rapture had come!

I think when I have kids, I won’t read them the bible, I’ll just read them one of the Superman origin stories.