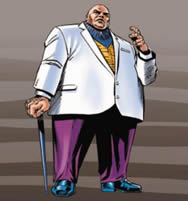 Tony Stark’s vanity has never been in question. Whether he’s signing world peace treaties, seducing page 3 models, thwarting inter-conglomerate espionage, or getting his spine returned to him on a shiny silver platter by an angry Hulk, the moustachioed man has to look his best.

Here I present you a fine selection of tailor made metal suits, evaluated in terms of design, power, fashion statement (“oomph” in the common tongue) and the all-important codpiece factor.

Powered by state-of-the-art Asgardian technology (okay, a big mystical crystal) this armor could withstand, and absorb, event the massive amounts of energy the Son of Odin threw at it. Ironically, it was still destroyed, by the latest in hi-tech warfare: a giant hammer.

Finest moment: Stark learns that technology has nothing on the power of the Gods, in Iron Man (vol. 3) #64. Nothing screams eighties like titanium shoulder-pads. The Silver Centurion also had a built in chameleon effect, previously used in the dark blue Stealth Armor.

Finest moment: Iron Man (vol. 1) #163 – 200, in which Stark uses this suit to take on Obadiah Stane, a battle which resulted in the destruction of Stane International. Serves him right! When the Big Green Guy is out levelling small towns and smashing military installations, only the biggest, heavy-duty exo-skeletal shell, designed for maximum strength amplification at the cost of reduced versatility and mobility, is capable of giving him a good hard spanking.

Finest moment: The Mark II Hulkbuster severely failing to live up to its title as World War Hulk commences.

The classic red & gold got a nineties injection with this modular, compactable and highly customizable model, which not only made saving the world that little bit easier, but allowed the animated series and subsequent toylines to spawn an arsenal of Iron Man variant, including Samurai Armor Iron Man… which is either emotionally offensive or insanely cool, depending on your age. Definitely the most iconic armour, and possibly Stark’s longest running outfit, lasting unchanged throughout the seventies. Quite what inspired his future first cousin once removed, Arno Stark, to attach giant cogs at the shoulders, we’ll never know.

Finest moment: The metal faceplate does nothing to hinder Stark’s boozing in Twisted Toyfare Theater’s surly and perpetually inebriated parody. I’m pretty sure these exploits are considered canon. Bulky without compromising sleek design, this suit goes for theoretical realism over big ideas, and not only requires a full behind-the-scenes support team to maintain and operate at full proficiency, but two hours of Tony’s time just to put the damn thing on.

Almost an amalgam of all that has gone before but with an industrial, automobile bent, the gold-plated titanium Hollywood edition Mark III operates with remote assistance from Stark’s artificial intelligence JARVIS, who may be infinitely more useful than his comic book counterpart, but is incapable of making a good cup of tea.

Accessorize, accessorize, accessorize! Originally, briefly worn by Stark, this armor was soon passed down to best buddy James Rhodes, fully aware that, for the financially stretched, a light grey and dark grey colour scheme would never go out of fashion. Though the suit previously went under the catchy name of “Variable Threat Response Battle Suit,” Rhodes decided that the “guns, lots of guns” was the route to follow, adopting a name that doesn’t exactly connote peace-keeping heroism.

Sure, grey is nice… but if you really want to impress the ladies, nothing screams affluence quite like this gold-plated setup. Strictly for those entrepreneurs wishing to take the Midas influence that little bit further, while adhering to the “big is better” principle. Also used a solar recharger; even in the sixties, Stark was anticipating global warming… which, as we all now know, doesn’t actually exist.

Finest moment: Tales of Suspense #40. One issue after his debut, Stark decides the grey suit was a little scary and, eventually rejecting the giant puppy armor prototype he’s worked so hard on, paints the entire thing gold. Because gold is the least intimidating colour of them all. The most powerful armor of them all, formed from nanotechnology and fused to Stark’s body via a techno-organic virus, which allows him to store the inner layers of the Iron Man armor in the hollows of his bones. A veritable cyborg indeed!