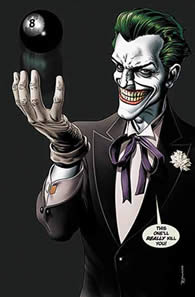 The Joker has been diagnosed with terminal cancer. Escaping high-security prison the Slab with a legion of “Jokerized” inmates, he plans for one final showstopper of a performance.

Large scale crossovers events are always difficult to collect in trade paperback format, as is evident in The Joker’s Last Laugh. The plot weaved in and out of the majority of 2001’s Bat-titles and, without reading those supplementary issues, we are forced to forever play catch up. Integral characters are alive one moment, and revelled to be dead four pages later, and it’s never apparent why superpowers such as Superman and Green Lantern are reluctant to offer aid. It’s a wholly unsatisfying experience. Marvel’s recent X-title crossovers, such as Age of Apocalypse, have been gargantuan, pricey compilations that have given us the complete picture. DC should have opted for something similar or not bothered at all.

I must confess that it does irritate me when casual graphic novel readers bemoan a book for inconsistent art – as any collector of monthlies will tell you, it’s something that comes with the industry – but the decision, whether deliberate or from desperation, to have a separate are team for each of issue is pushing it a bit too far. The book wouldn’t look so bad were the art team coordinated; instead, we have six drastically different incarnations of the Joker, and Batman shifting from a classic to contemporary outfit mid-scene. One minor character, Dina Bell, even manages to change from redhead to brunette to blond and back again; that’s some ability.

As with any book that bears the Joker’s presence, there are some inspired moments, but despite the Joker’s global assault, from which one can assume tens of thousands lost their lives, by the end of The Joker’s Last Laugh nothing in the DC universe has changed. That the credits page misspells the principle writing talent’s name (“Chick Dixon”!?) is indicative of a chapter in the life of Gotham’s Clown Prince of Crime that none really care for.