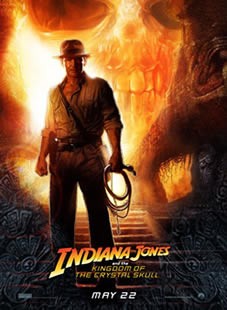 The nineteen year wait was over. The forth Indiana Jones movie was here. I knew it featured in some level of depth Kingdoms and Crystal Skulls, both of which I had already extensively researched in frantic preparation. I’d donned my finest fedora, packed my favourite whip and hammered my youthful features with a large rock. Just to get that weathered 65 year old look, y’know?

Again, I was prepared.

At least that’s the way it would have happened were Indy 4 to have debuted when it was supposed to, some 10 years ago. Since I’ve had my heart broken by numerous sequelicious cinema excursions – I think the Matrix sequels actually did more damage to my movie going optimism than The Phantom Menace ever could – I have progressively shunned all hype, ignored all posters and merchandise, and been apprehensive of all glossy trade paperbacks. No, gentle reader, I entered Kingdom of the Crystal Skull with absolutely zero expectations. No hope for anything remarkable, no desire to relive the magic of my youth. I entered that cinema emotionally dead inside.

It was preparation of a sort.

And so far, I seem to be the only person in my meagre social circle that didn’t hate the movie. I didn’t love the movie, either, but I left the three hours of darkness a happy bunny. Okay, a content bunny with a sore behind.

Sure the movie had its fair share of dire moments – the Tarzan scene proved that Jar Jar Binks wasn’t the biggest abomination Lucas could magic with the powers of CGI – but it felt like a Jones movie, far more then Temple of Doom ever had.

But the criticisms flooded in nevertheless. “It was cheesy and far-fetched” is my personal favourite. Have these people not seen the Last Crusade?

And folks clearly had difficulty with the aliens. So the possibility of other sentient life on one of the other estimated 4 trillion planets in our galaxy alone possessing the technology to visit our humble rock is more ludicrous than the concept of a cup that bestows immortality upon those who drink from it because it once belonged to the son of some guy (Joe, I believe his name was) who built the earth and every critter upon it with his bare hands in just seven days?

I guess people were so desperately looking for cracks in Crystal Skull that they didn’t take the time to look beyond the nostalgic haze and sit through the previous films with the same zealous condemnation that has every bitter cinemaphile and junk culture moron on this planet believing they can, and should, be a critic.

I’m aware how hypocritical that last paragraph sounds. But I never set out to demolish a film or book when I review it; in fact, I rarely leaving the cinema without feeling that whatever I just watched had no redeeming features whatsoever. No film is perfect, nor should it be.

I guess the point I was at some point planning on returning to was that people went into Crystal Skull intent on hating it. I’m sure they all had their reasons, many of which undoubtedly stem from the preciousness of nostalgia; we love to keep our memories intact. When big bad Hollywood tramples the daisies of our recollected youth, we take offence. But it is, as much as it grieves me to say this, only a film.

And also, I thought the CGI gophers were kind of cute… actually, I think I’d best leave it there.