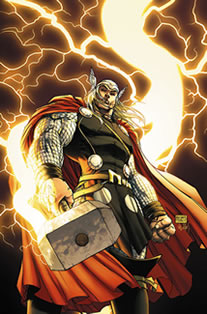 In the midst of Civil War, many fans believed that Thor would make a triumphant return, and sway the win for the Registration Act opposition. Unfortunately, the resurrected Son of Odin turned out to be a cybernetic clone, of all things, created by Reed Richards and Henry Pym to give the illusion that the God of Thunder would support their regime. One year later the genuine article is back, and he’s not to happy about said copyright infringement. Thor has been summoned from his eternal slumber by Donald Blake, who explains that when their personas were separated by Odin, Blake was transported to the void Thor now inhabits, but was returned to New York City when Thor broke the Ragnarök cycle. Thor returns to Earth, where he discovers that many of his fellow Asgardians are not dead, but hidden in human form.

J.M. Straczyinski wisely sidesteps the ridiculousness of it all by planting tongue firmly in cheek. The scenes between our burly Norse gods and their yokel neighbours teeter over the territory of parody, but are fun nevertheless.

Olivier Coipel’s character designs deserve infinite praise. I particularly love the way he draws Thor’s face; for once the Son of Odin looks like someone of Nordic descent, rather than a generic, square jawed hero. Coipel’s pencils suit Straczyinski’s comical moments perfectly, acknowledging an element of silliness without compromising the essential “cool factor” that brings grown-up geeks back to Marvel again and again.

Asgard has also been given a makeover, though Thor’s costume is as ludicrous as ever, if only slightly less kitschy. Most unexpected, however, is Loki’s sex-change; whether the Lord/Lady of Lies’ brand new rack and caboose will have any adverse effect on his/her role, or is purely cosmetic, is yet to be seen.

With the exception of a one-panel appearance by Doctor Doom, there’s little to suggest what might happen next; though if Straczyinski plans to take his time reintroducing the Norse gods back into the Marvel mainstream, that’s fine with me. Bar a confrontation with Iron Man, Thor has yet to integrate back into the Marvel fold, but that’s not necessarily a bad thing.

Causal pacing aside, Straczyinski’s new and improved Thor strikes a perfect balance between epic fantasy and small, character-driven moments. Unlike the death of Thor, which was shamelessly hurried, his rebirth has the potential to be a high concept soap opera.