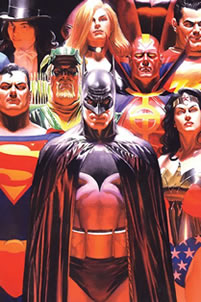 It has always been one of those great contradictions that, despite the potentially omnipotent powers of the various Justice Leagues combined, the DC Universe is still very much like ours. Poverty, famine and political corruption still persist, and the superhero populace appears content to accommodate the world’s atrocities rather than prevent them from repeating. Mark Gruenwald tackled the dilemma in the seminal Squadron Supreme, with a transparent JLA analogue deciding to use their combined power and intellects to force a utopia upon the world. Needles to say, the results were far from ideal. Justice presents us a flipside to Squadron Supreme. The world’s greatest criminal minds, amongst other Lex Luthor, Brainiac, Black Manta and Gorilla Grodd, all experience a simultaneous vision of a fiery Armageddon even their moralistic nemeses are unable to prevent. Combining forces, they’ve decided to make the world a better place; woe betide anyone who tries to stop them.

Alex Ross’s art give the book a similar look to Kingdom Come, but here he paints over Doug Braithwaite’s pencils, which to be fair bear a style comparable to Ross’s. The result is a book is almost too pretty for comics, compromising none of it’s dynamism for photorealism. Departing from regular DC continuity, the book’s many villains are re-visioned on a level that is both energizing and comfortingly familiar, amalgamated from various Golden and Silver age incarnations.

Just as Ross’s passion for the Silver Age ethos shines through in his work, Jim Krueger’s heroes are the humble, wholesome paragons of a time before a thousand Punisher inspired antiheroes waved their uzis about. But his villains are Justice‘s main attraction, intriguingly ambiguous – at least in this volume – that we almost want them to do good. But in that grand Shakespearian tradition, we know that pettiness and greed will ensure that Luthor’s ensemble will do more harm than good, regardless of the purity of their intentions.

It feels petty to criticize a book of such quality, but it does puzzle me why DC has seen fit to publish the entire 12-issue run across 3 volumes. As it stands volume 1 is but the introduction to a larger story that could easily be, and should be, read in its entirety.

Publishing strategies aside, Justice is an amazing series. More importantly, like Kingdom Come or Batman: Year One it stands as a work of superhero fiction that will be immediately accessible to all readers, due to both the immense talent involved, and one of the greatest line-ups in comic history.