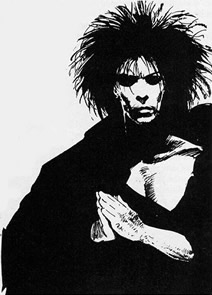 With the success of the movie adaptation Stardust, as well as his novel American Gods, Neil Gaiman’s work is finally getting the mainstream attention it deserves. Though alongside Allen Moore, Gaiman has been one of the few American comic writers to enter popular culture, gathering critical acclaim from outside the comic book sphere, many of his appreciators may still not recognise his graphic novel work outside of The Sandman series and its numerous offshoots. For the sake of brevity, I’ve concentrated on Gaiman’s work that is currently available in graphic novel format, presented in chronological order. The list far from extensive, but I think most would agree that I’ve covered all the classics. As ever with the comic industry, some of the publishing dates may be debatable – in most cases I have given the year in which the stories were published in their original comic format.

Gaiman’s first graphic novel collaboration with Dave McKean, in which a narrator recalls events from his childhood in Portsmouth, where he was taken by his father to be treated by an osteopath who once worked for Al Capone. In what would become a prevalent theme in Gaiman’s work, Violent Cases is a study in the relationship between memory and imagination, as the narrator’s accounts are increasingly skewed by an imperfect recollection of things he was too young too have understood at the time.

An update of a Silver Age DC Comics character with shares similar plant-based powers to Swamp Thing. Featuring cameos from Batman, Poison Ivey and the aforementioned Swampy. This could be considered a precursor to the seminal Sandman series, in that though it is set within the DC Universe, its idiosyncratic atmosphere is more in line with Gaiman’s personal work. Dave McKean’s art uniquely blends colour and monochromic imagery – Orchid is purple while those around her appear colourless – complements the eponymous heroine’s emotional reclusion.

The definitive Gaiman series, undoubtedly one of the greatest comic book runs of all time, and the only comic book to find its way onto the New York Times Bestseller List. The ten volume tale of Morpheus, Lord of Dreams, and his fellow personifications of universal concepts The Endless, incorporates countless myths, legends and fairytales into an epic, Grecian tragedy.

Though the first volume, Preludes and Nocturnes occurs in the mainstream DC Universe, the series progressively took its own direction. The Sandman spawned numerous spin-offs, the majority of which were not written by Gaiman but are worth reading nevertheless.

Lead character Tim Hunter and the magician-in-training plot bear an uncanny similarity to J.K. Rowling’s Harry Potter, though this is an infinitely more pensive series. Though Gaiman was only involved in this initial miniseries, primarily intended as a guide to the various forms of magic an mysticism in the newly retconned DC Universe, a praiseworthy ongoing series written by John Ney Rieber expanded upon the Tim Hunter character and his fairy heritage, and is highly recommended to fans of The Sandman. Art by John Bolton.

An emotional, ethereal yarn in which an anonymous film director, told that he has a terminal illness, attempts to create the film he will never get to produce in his head, with a cast of friends and family. Simultaneously empty, depressing and inspiring, Signal to Noise lingers in the mind long after. Again, art by Dave McKean.

Two graphic novel spin-offs starring the popular goth chic rendition of Death, sister to the Sandman, Morpheus. The High Cost of Living, in which Death takes human form once every century in order to appreciate life, is arguably the greatest thing Gaiman has ever written, and has undoubtedly reduced countless emotional readers to tears. The Time of Your Life is also very good.

The Tragical Comedy or Comical Tragedy of Mr. Punch
1995

A surreally haunting portrayal of a man haunted by his childhood, with bizarre art by long-time collaborator Dave McKean that blends painting with photographic imagery. Like Violent Cases this is a story about stories, with convincingly disturbing themes of early childhood perception and the nature of memory, that really makes you appreciate just how demented the Mr. Punch character is.

Began as another prestige-format illustrated novel with delicate illustrations by Charles Vess, though it is now most commonly published in a more conventional illustration-free paperback format. Now a popular feature film, though the book has a far more earthly, folktale ambience to it.

A Collection of Gaiman’s earliest short stories, including John Constantine, Swap Thing and the Golden Age Sandman. One for the most ardent fans only, really.

The Sandman: The Dream Hunters
1999

Not strictly speaking a graphic novel, but an illustrated novella, with incredible art by Final Fantasy artist Yoshitaka Amano. Gaiman draws his inspiration from numerous Japanese myths, predominantly that of the kisune, or fox spirit.

Based on the old Commedia dell’Arte and Harlequinade pantomime, from which Mr. Punch also derived, this contemporization sees the mischievous entity Harlequin giving his blasé love interest Missy his heart… by literally nailing it to her door. It’s an intimate, bittersweet tale, beautifully painted by John Bolten. Includes an interesting essay by Gaiman on the origins of his tale, ‘Notes on a Harlequinade.’

Though written primarily to financially aid his lawsuit against Todd MacFarlane for ownership of the Miracleman property, this relocation of the Marvel Universe into historical territory is an entertaining swashbuckling epic that can be appreciated regardless of one’s prior knowledge concerning its characters. Gaiman’s classical reinterpretations of popular Marvel franchises (the Fantastic Four, X-Men, Captain America et al) are intelligently mixed in with actual events, though thankfully the book doesn’t take itself too seriously. Art by Andy Kubert.

Began life as a dire, low-budget BBC miniseries, co-written with Lenny Henry and aired in 1996. Gaiman wrote a far superior companion novel, which was later adapted into graphic novel form by writer Mike Carey and illustrated by Glenn Fabry. This is by far the best of the three adaptations, with Fabry’s art capturing everyman Richard Mayhew’s journey through the labyrinthine London Below with a grandeur and attention to detail that no television budget could possibly match.

Just as he did with DC’s original Sandman, Gaiman attempts to breathe life back into Jack Kirby creation The Eternals, an offshoot of humanity created on Earth by the alien Celestials. The nearest to conventional capes & tights shenanigans Gaiman has written in many years, this book sticks closer to the original mythos than his previous reboots. Unlike much of Gaiman’s Marvel or DC work, it is perhaps best avoided by those intimidated by the superhero genre. Art by John Romita Jr.