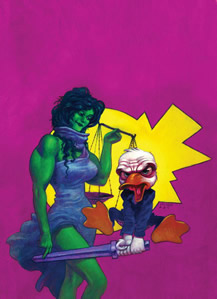 The Duck returns just six years after his last series, which, for a character plagued by numerous legal battles, ownership squabbles and the weight of a rancid Lucas-produced 80s movie hung round his neck, isn’t at all bad. But then Howard has always been more an obscurity than a prospective franchise, fuelled by an ingenious tagline (“Trapped in a world he never made!”) and, well… the fact that he’s an anthropomorphic duck coexisting alongside Spider-man, the Avengers, the X-Men et al. Ty Templton, who has written countless cartoon books in the past, has a word heavy urgency about his composition that is delightfully refreshing. He manages to cram as much plot, topical themes and oddball characters into four issues of Media Duckling as would take many other writers eight. The result is an unsurprisingly irreverent tale that takes jabs at everything from celebrity culture, YouTube (referred to as MeTube here) and blogging, to illegal immigration, George W. Bush, and the multitude of MODOK clones that A.I.M. has spawned in the past.

Juan Bobillo’s art has improved greatly since his work on She-Hulk (who also features in this book) though this is due in some part to Nester Pereyra’s luminous colours. The inept scientist / duck hunter twins Bradley and Patton are especially enjoyable, looking somewhat like Kane & Lynch minus the Kane.

Also included are Howard’s first issue, all the way from 1976, and a humorous short from the Civil War: Choosing Sides one-off. If nothing else the former demonstrates how much comics have changed (for the better, thankfully) and features perhaps the most contrived Spider-man guest appearance of all time, which is saying quite a lot. While the latter is amusing enough, it’s somewhat confusing in that it occurs chronologically before the main story that precedes it.

As was initially mentioned, Howard’s appearances are few and far between. As much as I love the Groucho-inspired fowl, he has always run the risk of overexposure. Templeton’s take on the Duck is perhaps the best yet, but lets leave it a few more years before another, okay?