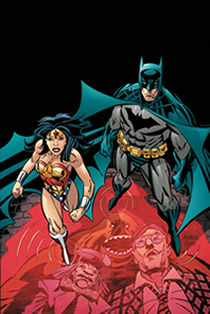 With Y: The Last Man having reached its conclusion and Brian K. Vaughan receiving all manner of acclaim for his work on Lost, DC clearly saw dollars in this mixed collection of Vaughan’s earliest superhero work.

Vaughan has stated in the past that he is more comfortable writing for his own characters, and that is entirely evident in his depiction of Batman in ‘Close Before Striking,’ in which Bruce Wayne’s heel alias Matches Malone is found dead. It’s a forced story, both in its inconceivable – and perhaps more vitally, uninteresting – plotting and characterisation. Batman has always been portrayed as only marginally saner than the lunatics he opposes, but here he is uncharacteristically unstable to the point of schizophrenic. Despite the Bat-title, the book also includes the Wonder Woman story ‘A Piece of You’ which frankly should have never been republished. The earliest of Vaughan’s works in False Faces it does nothing but demonstrate Wonder Woman’s incongruous position in the DC Universe.

Fortunately, ‘Mimsy were the Borogoves’ shows how much Vaughan had improved in just two years. A tale that wouldn’t have been out of place in Batman: The Animated Series, featuring the Mad Hatter’s attempts to create his won Jabberwocky using Dr. Kirk Langstrom’s Man-Bat formula, it uses the Lewis Carroll source material to enjoyable effect, and is the only recommendable story printed here.

Finally, there’s a 5 page short from a Secret Files special, ‘Skullduggery’ which attempts to introduce a new villain, master of disguise the Skeleton. The short hints at the Skeleton having direct ties to Wayne’s past, but the character never caught on… which essentially makes the short’s inclusion utterly pointless.

There’s really no real reason why anyone should want to read False Faces other than to witness a brilliant comic talent in the making. Even then, you’re better off reading Y: The Last Man, Runaways, Ex Machina, or The Escapists… and if you’ve already read those, read them again.