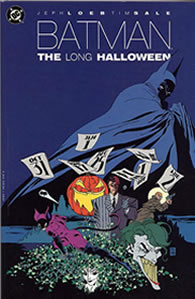 Essentially years two and three to Frank Miller’s seminal Batman: Year One, Loeb and Sale’s superhero noir The Long Halloween resumes the Caped Crusaders conflicts with Gotham’s feuding Mafiosos, the Falcone and Maroni families, introduced in Year One, as well as providing an origin of its own. When Batman, Commissioner Gordon and hotshot district attorney Harvey Dent make a pact to bring down the Falcones, the sudden appearance of the Holiday serial killer – he strikes only on public holidays – with his sight set on Gotham’s gangsters puts both Dent and Bruce Wayne in the crosshair of suspicion.

The 13 issue length – the series was originally published from one Halloween to the next – does present some pacing problems, with the story stretched at times, but kudos to Jeph Loeb (Batman: Haunted Knight) for setting up an premise intricate intriguing enough to endure. Tim Sale’s art captures the 1940s aesthetic perfectly while still looking contemporary. As with the best Batman artists, he realises that the series true antagonist is Gotham itself, presented here as a timeless labyrinth that is as much shadow as substance.

Harvey Dent’s transformation into Two-Face is inordinately hurried for an event which Loeb spends much of the book laying the groundwork, perhaps due to the overwhelming number of costumed rogues that make strained cameos. Appearances from characters such as Poison Ivy and Solomon Grundy, the latter of whom really undermines the atmosphere of such a book, prove far less intriguing than the gangster driven murder plot at the book’s core. And that’s a shame, as the mystery concerning the Holiday killer’s identity is a superb hook.

But the inclusion of onetime joke villain Calendar Man, here portrayed as a Hannibal Lector style serial killer whom Batman visits in Arkham for clues on finding the Holiday killer, is a masterstroke. It’s surprising that, bar Loeb and Sales sequel Dark Victory, he hasn’t been utilised to such great effect since.

Whilst not standing beside Batman: Year One and The Dark Knight Returns on the podium of essential Batman reads, The Long Halloween is not far behind. Loeb and sale have given us Batman at his most primitive and endearing, and the killer’s eleventh-hour reveal is genuinely unexpected and unforgettable.