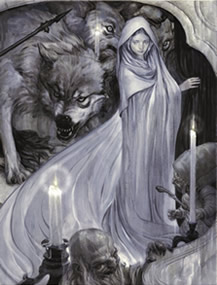 Fables’ strength has always been that, whether immersed in Bill Willingham’s universe or not, anyone fortunate enough to have survived childhood will be familiar with its myth, legend, folklore and fairy tale beginnings. There’s an instant comprehensibility to its ingenious premise that not only places us in the familiar territory of the worlds within the series, but the fantastical landscape we created as children, when these grisly and macabre tales were read to us as by innocently sadistic parents. This is none more apparent than in 1001 Night of Snowfall, an iteration of the Persian fable of Scheherazade, in which envoy Snow White finds herself at the mercy of a sultan who systematically has the virgin he beds each night executed the following morning to ensure her honour to him. To impede the loss of her head, Snow White bemuses him with stories galore. One thousand and one, in fact.

But it’s the stories Snow imparts that form the core within this effective but underwhelming frame tale, a decuplet of anecdotes and character origins that flesh out Fables cast in a myriad of ways. Amongst others we discover what drove Bigby to become the Big Bad Wolf, and, in the book’s most heart-rending segment, the traumatising events that led to Flycatcher’s current state of mind. There are some seriously dark elements in here. Many of the shorts are laced with Willingham’s usual irony and tragedy, or disturbing truths that are only half revealed, such as Snow White’s history with the associated seven dwarves.

I could write everlastingly on the quality of the art on display here, but let’s just leave it at “overwhelming.” That is not to in any way undermine mark Buckingham’s work on the regular series, which obviously had tighter deadlines to adhere to, but the talents of Charles Vess, Tara McPherson, John Bolton and many more lends 1001 Nights an interior of cover quality art. This is the closest a graphic novel gets to being a coffee table book outside of anything by Alex Ross.

Rather than tell a separate narrative that could easily have been printed in the regular series, Willingham’s decision to pad out his creations in this manner works exceedingly well. Though not absolutely vital, 1001 Nights of Snowfall spreads precious extra layers of depth over a vastly populated realm that has already gone beyond multifaceted, without compromising the pace of the main run.