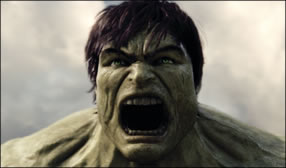 Best described as a noble failure, Ang Lee’s Hulk was the Lisa Simpson of Marvel’s recent film output. Brave and ponderous, its shades of Oedipus didn’t exactly thrill an audience who simply craved a big green guy in purple pants smashing things up. Just as Tim Burton’s anguished Batman perplexed those weaned on the Adam West farce, Lee’s Hulk was condemned by a generation whose experience with the Jade Giant went as far as Bill Bixby switching purple pants with Lou Ferrigno. Louis Leterrier is all too aware of this nostalgic bias, with the new, simplified Hulk, now Incredible, alluding to the series as frequently as the comic. Though this is a reboot rather than a sequel, it does virtually continue where the previous movie left off, with the familiar origin story thankfully reiterated within the space of the titles.

Bruce Banner (Norton) is in hiding in Rio De Janeiro, struggling to calm his inner beast while he develops a herbal cure for the gamma radiation responsible for his transformations. Needless to say, General Thaddeus Ross (William Hurt, lacking the paternal warmth that made predecessor Sam Elliot somehow sympathetic) and his team of elite commandos soon locate him, and Banner is pursued back to good ol’ US of A.

Norton is somewhat subdued as the modern Dr. Jekyll, though peculiarly his likeness is less evidently transmitted onto the CGI monstrosity as Eric Bana’s was. The Hulk himself is a matter that will divide fans, perhaps into two camps of those with merciful imaginations and those without. Whereas Lee’s Hulk was a consciously improbable creation, Leterrier’s veined, textured rendering struggles to make an undeniably ridiculous concept believable. It doesn’t aid matters that the gap between video games and cinema has tightened considerably since Hulk last hit screens in 2003.

The film’s main problem lies within these CGI sensibilities. Tim Roth’s simmering agent Emil Bronsky, lacking his comic counterpart’s Russian accent, is a compelling enough antagonist, but his transformation into the exoskeletal Abomination is abrupt and hurried, with the monster lacking Roth’s initial menace. Ironically, the film’s most compelling scene is one in which puny Norton flees US agents through the ghettos of De Janeiro. Liv Tyler’s surprisingly good performance as Betty Ross adds some dispensable humanity to the proceedings, but like everyone else her role suffers characterisation malnourishment.

With the enjoyably hokey Transporter films and Unleashed under his belt, Leterrier has proven that he can handle action. But that is not to say that Incredible Hulk is not without its share of little moments, with several humorous references that make you wish this film was more than sporadically good. References to the source material are in abundance; the serum Bronsky takes is a successor to Steve Roger’s super variant, while Robert Downey Jr.’s cameo as Tony Stark preludes to the forthcoming Avengers strategy.

Though it does nothing particularly wrong, sloppy editing and a lack of character development prevent The Incredible Hulk from being anything more than mediocre. With an additional 70 minutes of footage rumoured to be making its way onto a director’s cut DVD, there’s hope for a superior version of this unremarkable but potentially interesting franchise.