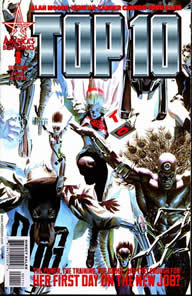 Though Alan Moore has never bettered his eighties output, and likely never will, it’s amazing how strong his work for America’s Best Comics has been. At first glance The League of Extraordinary Gentlemen, Tom Strong and Promethea are all typical high-concept ideas, of the kind the comic industry has long ago oversaturated. Of course, this is Alan Moore, the only writer capable of taking a half-dozen Victorian fictional creation and not only making them into a crime-fighting team, but, more importantly, something entirely his own. An overflowing showcase for Moore’s endless source of creative wit, Top 10 could have been a simple blend of American cop show and superhero parody. Marvel has recently done just that with Mutant X. The city of Neopolis, in which every inhabitant is a superhero, vigilante, alien, trans-dimensional being or mad scientist, embodies this aforementioned sense of oversaturation; when everyone has a power or ability, death defying feats and imminent doomsdays will eventually fail to impress. Even the city’s rodent population wear capes and can fly.

The officers at the 10th Precinct Police Station, co-created with Gene Ha, are a large assortment of police and superhero genre archetypes, from six-shooter wielding techno cowboy Duane “Dust Devil” Bodine and rookie Robyn “Toybox” Slinger to Sergeant Kemlo “Hyperdog” Caesar, a talking Doberman in an anthropomorphic exoskeleton. Despite being amalgams of various famous icons, the book’s characters are all outstanding.

As one might expect from Moore, the book is so overwhelmingly choc full of references that it’s practically a Where’s Wally / Waldo of sly superhero analogues and billboard parodies, which range from the comic-centric (a rancid Bucky corpse busks behind a sign reading “Really Dead, Please Help!”) to the more literate (graffiti in a toilet: “Oedipus is a motherfucker”).

Moore has often been accused of instigating the anti-superhero comic movement, but reading Top 10 I couldn’t disagree more. Unlike Warren Ellis and Garth Ennis, Moore capable of ridiculing his creations without showing contempt for the genre he is often confined to. His characters are surprisingly human, which makes them all the more compelling in Neopolis’ labyrinth of fantastical wonders that always seem to be weighed down by the practicalities of our reality.

Despite Top 10‘s endearing quality it’s tempting to feel a little disappointed that, from the man who created V for Vendetta and The Watchmen, the end result sticks so rigidly to the cop show formula. But as Moore proved with The League of Extraordinary Gentlemen, even when he’s playing for kicks with a potentially stale concept the end product is never less than inventive.