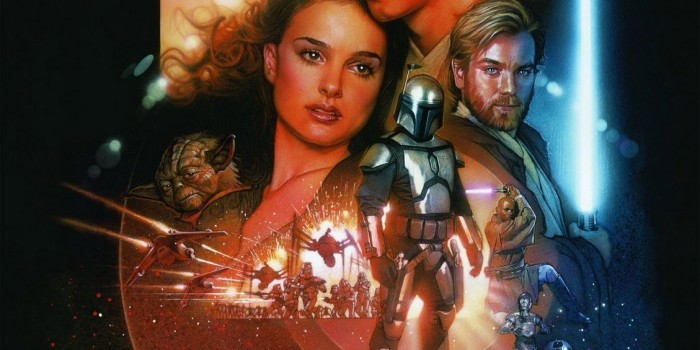 This is Rose-tinted, in which I work my way through a series or franchise from beginning to end, like the diligent geek and borderline obsessive compulsive that I am, and re-evaluate it from an older and even bitterer perspective. Don’t cry for me, I’m already dead.

I was disappointed with The Phantom Menace on release, but it didn’t scar me for life as it seems to have scarred so many others. I’ve always found much to enjoy in its awkward hodgepodge of mythos-building and Saturday morning cartoon tomfoolery. I also found more than enough to like about Revenge of the Sith and its original trilogy set-up… so why does Attack of the Clones still leave me feeling completely hollow?

Let me count the ways…

All shiny and plastic

Nothing in Attack of the Clones looks remotely convincing. Actors float about in an abyss of unconvincing CGI, staring blankly at the alien beings around them as though they’re all blind.

In a way, the human actors are the odd ones out here. It would probably have been more effective to just replace everybody with computer generated facsimiles. Mind you, that’s exactly what happened with The Clone Wars animated series, arguably the greatest thing to have come from the franchise since Empire Strikes Back. So at least some good came from this movie.

Anakin is all grown up… and still a brat

I never had a problem with the depiction of young Anakin in The Phantom Menace. Jake Lloyd’s performance wasn’t stellar, but neither was it half as bad as some fans still insist. Hayden Christensen’s take on the man who would be Darth Vader, however, is every bit as bad as its reputation suggests. He’s a petulant, impulsive brat and isn’t fit to fill Vader’s boots.

The key to successfully depicting a hero’s downfall is getting the audience to actually care about said hero prior to his fall from grace. To be fair to Christensen, who was brilliant in Shattered Glass, he’s lumbered with Lucas’s dire-alogue, but regardless of where things went horribly wrong it’s difficult to give a damn about a character who unremittingly argues with the one person who gives a damn about him, while endangering the lives of those around him at every opportunity.

“I don’t like sand. It’s coarse and rough and irritating and it gets everywhere…”

Yes, George Lucas has a tin ear for dialogue, but one might argue that droll exposition and cheesy banter has always been part of the franchise’s creaky and old-fashioned charm (when performed far better in previous instalments). The hollow, dead-eyed romance between Anakin and Padmé Amidala will likely go down as one of Hollywood’s strangest. Not only is there the age difference and the transition from an almost maternal bond to a sexual one in the course of a few scenes, but Padmé only finally opens up to Skywalker after he confesses to killing a village of Tusken Raiders, children and all.

The Obi-wan and Anakin comedy duo

Clearly the intention here was to reproduce the witty banter of the original movies, something that was sorely lacking in The Phantom Menace. But from the moment they appear, our central Jedis are irritating to the extreme. Ewan McGregor’s performance is much improved, though; he’s now halfway between the bland padawan from Menace and a pretty convincing impersonation of Alec Guinness, but with a dry wit and a far more physical presence.

Attack of the Clones kicks off with what is essentially a car chase through the sky-streets of Corescent. Not a bad concept (it’s relatively innovative as far as the franchise goes) so much as a badly executed one, and one that pretty much sets the precedence for most action scenes in the movie. Everybody is leaping, rolling, falling and switching places with a weightlessness that robs such scenes of any tension, leaving the viewer lost and bored.

Later on, we have a similarly silly pursuit through the droid factory on Geonosha, which I’d possibly go as far as to call the lowest point in the series, which is saying something. The damp squib action on Geonosha is dampened further still by Lucas using C-3PO as a substitute Jar Jar Binks. I honestly feel that Threepio’s comedic moments, in which his head is swapped with that of a battle droid, are far more cringeworthy than any of Phantom‘s Gungan malarkey.

Jar Jar Binks dooms them all

Yup, Binks pretty much pushes the Clone Wars into motion, by proposing that that senate give emergency powers to Chancellor Sheev “call me Emperor” Palpatine. I rather liked this plot point, simply because it’s so painfully preposterous, much like Earth politics. I remember going to the midnight showing of Attack of the Clones with the advance knowledge that the little green guy would be waggling his lightsaber at some point in the movie. I’d expected him to be a force-heavy combatant, giving his mastery of it in Empire, but no, he instead whirls around Count Dooku like the Tasmanian Devil. That said, it’s not a terrible scene, and Anakin’s amputation leads us nicely towards his transformation into something “more machine than man”. A far better fight than the Yoda and Dooku one is Obi-wan’s confrontation with Jango Fett on the cloner planet Kamino. Jango was an odd concoction of pointless fan service and a plot element so integral to the series that it changed the universe forever, and this fight illustrates how a highly skilled bloke with nothing but a few tricks up his sleeves might stand a chance against a Jedi, and I love it.

I also love the ease with which Mace Windu decapitates Fett Senior later in the movie. Without the element of surprise provided by Slave I, he rightly stood no chance. Is Attack of the Clones all bad?

It’s my least favourite movie in the series, and the only one in which I believe the bad elements outweigh the good, but Star Wars Episode II: Attack of the Clones does some things well. The last quarter of the movie is enjoyable enough, with the coliseum battle more than making up for the droid factory nonsense. Mace Windu, Yoda and a whole bunch of other Jedi finally see a bit of action, rather than just pouncing about at the Council. I also like Obi-wan’s investigation that leads him to the clone troopers, whose entrance ushers in the dawn of the stormtroopers.

I’m so much of a sucker for that Fett visor design that I also love the introduction of the galaxy’s most fearsome bounty hunter for what it is: unabashed fan service. Though in this case, unlike The Force Awaken‘s nostalgic retread, it’s fan service that actually expands the Star Wars universe and mythology.