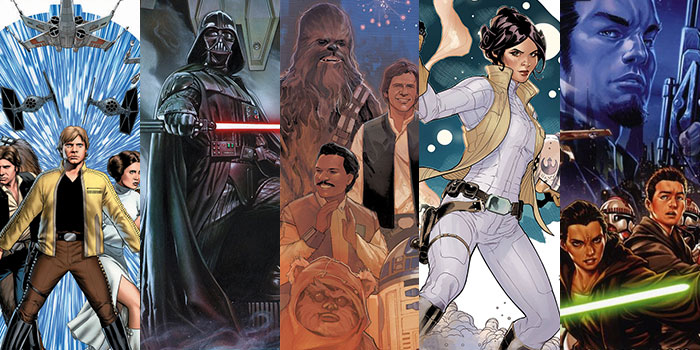 Star Wars, Star Wars, Star Trek, Star Wars… that’s all it’s been for the past few weeks. It’s almost as if Disney has tapped into my brain with their newly patented hypno-hype machine, and I’m unable to resist buying anything that has those two words emblazoned across it.

A few years back I decided to leave Marvel and DC behind, excluding a few titles such as Animal Man and Hawkeye. While I occasionally miss them, it was becoming increasingly clear that I’m a) too busy and b) too poor to keep up with the Big Two’s perpetually rebooting multiverses. That, and I wanted to focus on indie and creator-owned books rather than tired retreads and series seemingly published with little more than merchandise in mind.

However, with Marvel’s acquisition of the Star Wars comic line I’ve been faced with a moral dilemma, and have once more been drawn to the dark side with Disney’s new take on the Expanded Universe. Yes, it’s a shame that the Dark Horse era has been relegated to the ‘Legends’ imprint and deemed non-canon, but to be fair its most recent output had felt stale. There’s now a newfound excitement to see where Marvel will take the universe, particularly once the drive to cater purely to 70s nostalgia has run its course.

2015’s first five trade paperbacks are now available, with a load more hitting the shelves in January and February 2016. So far, Marvel’s output has been mixed but overall surprisingly decent. As with The Force Awakens, how much pleasure you derive from these initial trades depends on how much you value quality over innovation, and how invested you are in certain areas of the franchise.

I plan to make this a monthly/bimonthly feature, focussing on the graphic novel releases and taking a brief look at how they impact the Star Wars mythology, and whether or not they’re worth your time and money. When’s it set? Between Episode IV: A New Hope and Episode V: The Empire Strikes Back. The plot runs parallel to Darth Vader, with both first volumes converging at the end.

What’s it about? Fresh off the Rebels’ success at the Battle of Yavin, this ongoing series kicks off with Luke, Leigh, Han and company infiltrating an Imperial TIE fighter factory and running into a certain Sith Lord. Boba Fett pursues Skywalker, and his discovery sheds new light on Vader’s motivation in Empire Strikes Back.

Worth buying? Most definitely. When Disney and Marvel announced that they were resetting the Expanded Universe, I had almost no interest in comic series following the same classic characters in yet another familiar romp, but ‘Skywalker Strikes’ is a thoroughly class act. It’s by far the best of the new Marvel Star Wars titles, and John Cassaday’s incredible art is quite possibly the closest I’ve ever felt to reading a blockbuster movie.

Best bit (spoiler free): ‘Skywalker Strikes’ finally answers the question a million fans have asked since Empire: “what would happen if Vader got stamped on by an AT-AT?” Okay, maybe not, but the result is magnificent. There’s also a rollicking punch-up between Luke and Boba Fett. When’s it set? Between Episode IV: A New Hope and Episode V: The Empire Strikes Back. The plot runs parallel to the ongoing Star Wars series, with both first volumes converging at the end.

What’s it about? This ongoing series follows Vader’s hunt for Luke Skywalker following A New Hope, while he connives to counter the Emperor’s plans to replace him. It also details Vader’s punishment following his Death Star whoopsee.

Worth buying? Again, definitely worth a read. Salvador Larroca’s art is magnificent, and Kieron Gillen wisely avoids giving Vader an internal voiceover, instead using flashes of imagery from the prequels and a spunky new sidekick (the fun if irritating “rogue archaeologist” Aphra) to give readers a peek into Vader’s head without ever revealing too much. While I love the Dark Lord of the Sith as much as anyone, I’d feared that an ongoing series focussed entirely on him would be a mistake, but Gillen’s series hits all the right notes without pushing things into Splinter of the Mind’s Eye territory.

Best bit: Vader discovers the name of the young x-wing pilot who blew up the Death Star, a revelation that not only adds an additional layer of depth and motivation to Empire Strikes back, but makes me want volume 2 of this series now. I’ve genuinely no idea how this plot will develop. When’s it set? Part of the ‘Journey to Star Wars: The Force Awakens’ line, it’s set straight after the destruction of the second Death Star in Episode VI: Return of the Jedi.

What’s it about? Shattered Empire takes us through the Rebels’ battle against the post-Endor remnants of the Empire, all from the perspective of A-Wing pilot Shara Bey, the mother of Poe Dameron.

Worth buying? Not really. Despite being marketed as a prologue-of-sorts to The Force Awakens, Shattered Empire is ultimately a bit pointless. It’s interesting to see Naboo outside of the prequels (even if it hasn’t changed), but it seems that the miniseries’ sole purpose is to clarify that Poe Dameron had parents who fought in the Rebel Alliance. But the book’s fine if taken as a primer for Marvel’s new Star Wars line: it also includes issue 1 of the Princess Leia miniseries and the first issue of the original comic adaptation of A New Hope, now remastered.

Best bit (spoiler free): The ensemble of artists know how to draw a space skirmish, and the nostalgia factor is strong in this one. When’s it set? Technically it’s set during the Rebels animated series, but it’s essentially an extended flashback set during the Jedi massacre in Episode III: Revenge of the Sith.

What’s it about? The Last Padawan details the origin of Kanan Jarrus, how he survived Order 66 after the death of his master Depa Billaba, and exactly why he ended up looking half-Jedi half-Han Solo.

Worth buying? If you’re a fan of the Rebels series, then definitely. However, those unfamiliar with the central characters may want to give it a miss, simply because its subject matter won’t resonate with them.

But I must say, I really enjoyed this book. Former Rebels executive producer Greg Weisman’s story is simple but effective, making it great fun for fans of all ages. His overuse of narration makes The Last Padawan feel more like Dark Horse’s older output, but that’s not necessarily a bad thing, and I loved Pepe Larraz’s energetic art – it’s cool seeing the crew of the Ghost rendered in a more realistic style. Well, realistic within the context of a Star Wars comic.

Best bit (spoiler free): Weisman illustrates how close the Jedi and clone troopers were before Palpatine initiated Order 66, and how lost the Jedi would have been when their allies suddenly and inexplicably turned on them. When’s it set? Immediately after the credits roll in Episode IV: A New Hope. So if you were ever curious as to what was said after Luke and Han received their awards, you’re in luck. Unfortunately, no reasons are provided as to why Chewbacca was snubbed at the ceremony.

What’s it about? This 5-issue miniseries focuses on the aftermath of Alderaan’s destruction, with Leia taking a break from the Rebels to unite the remaining survivors of her home planet.

Worth buying? Out of Marvel’s initial runs of trades, Princess Leia is the only one that doesn’t capture the feel of Star Wars. I love terry Dodson’s art and Jordie Bellaire’s vibrant colours, but neither are suited to this franchise. Mark Waid makes the most of a snappy dynamic between Leia and X-Wing pilot Evaan, but the whole book feels a bit off, as if it lacks a reason to exist. Even Leia doesn’t quite feel right; she’s more spirited and ass-kicking than she ever was in New Hope or Empire.

Best bit (spoiler free): The new costume design for Leia is a brilliant amalgam of her classic white cloak and Padmé Amidala’s ensemble from Attack of the Clones. And just like that, she’s a kick-ass icon for thousands of young female comic readers.